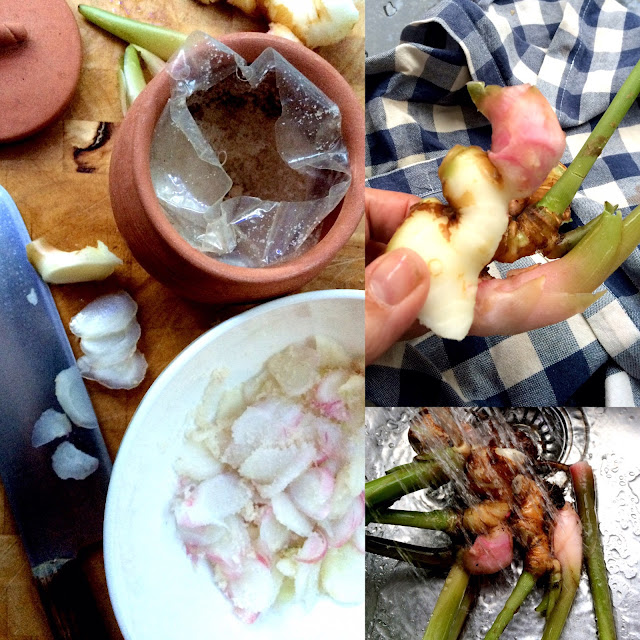 To make gari, the lovely pink pickled ginger for sushi, you need to have very fresh ginger roots, which are not to easy to find. So I grew my own! Bough ginger roots sometimes have a little green bud, or develop one if you leave them outside the fridge, and in this case you can just break a piece off (the one with the bud, of course) and plant it! I did just this, not knowing what to expect, and I was rewarded with a big leafy ginger plant! When I 'harvested' the roots they were fresh and fragrant, perfect for making gari.

For the recipe I looked up one of my favourite books, The Book of Sushi, published by Kodansha International. Sadly Kodansha doesn't publish anymore in English, which is a real pity as they made some outstanding books on Japanese culture, including several cooking books, so this book may not be easy to find now. 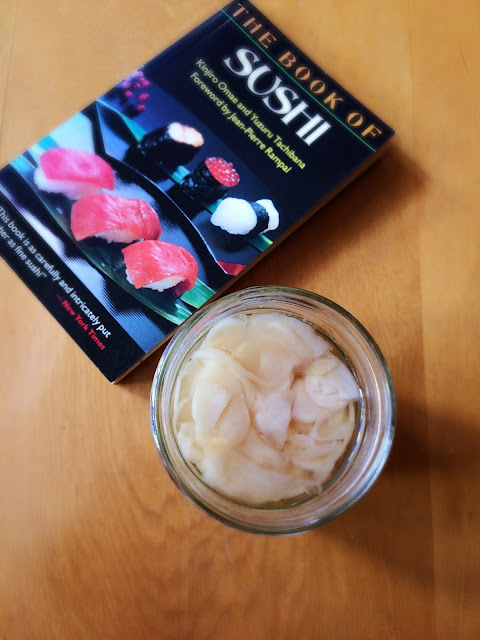 I washed my ginger roots (I could not break much of it, as I made the mistake of planting it in a pot with a lemon tree and the root was too deep down to remove completely), but I had enough. 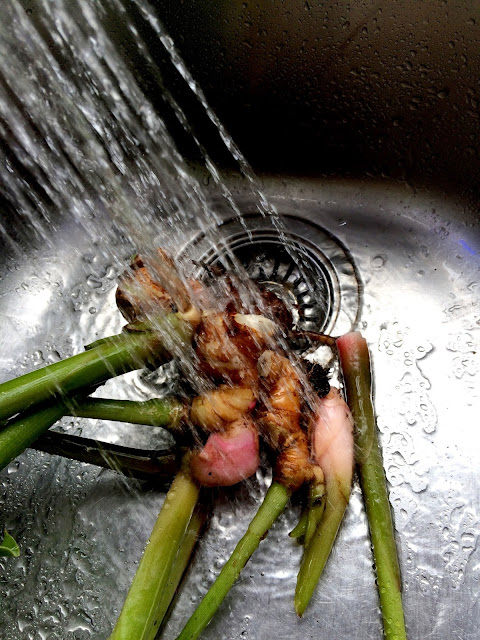 The skin is easy to remove with a spoon or finger nails. Remove the buds, you just need the root, hopefully with a hint of pink in it. Then slice the root as finely as you can manage. 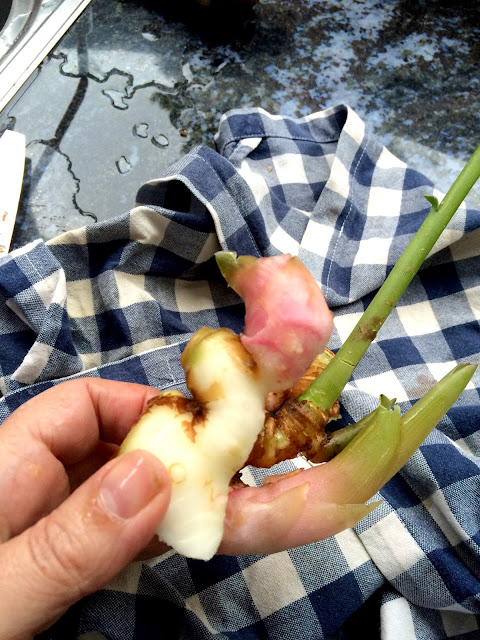 Then I added a few generous pinches of salt (I used some unrefined salt, but the book is not specific on which salt - or how much, to use) and left it stand for one day. I put a weight on top too, to make sure that the ginger got well pickled by the salt, but this was not requested by the original recipe.
The day after I rinsed the ginger under fresh water. 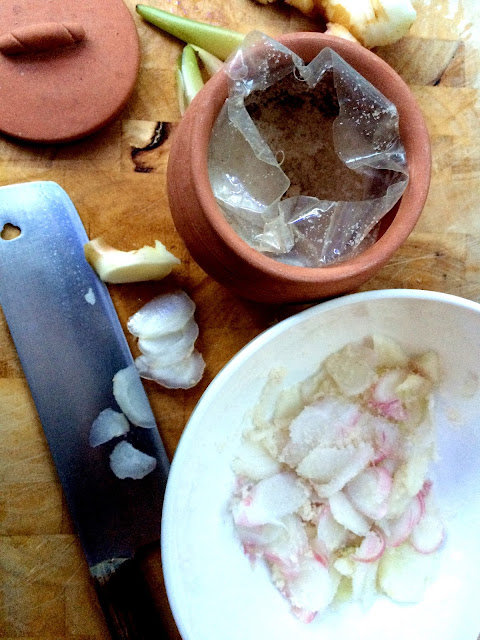 Then the book says: ....place in a marinade made of 1 cup of rice vinegar, 7 tablespoons water and 2½ taspoons sugar. Allow the ginger to marinate one week.

Well, first of all I noticed that I run out of rice vinegar, but I had some sushi vinegar, which already contains sugar and salt. Secondly, and this is my personal taste, I rather use less sugar (and salt) so I did a mixture of half sushi vinegar and half water. Thirdly, I brought the mixture to the boil, threw the ginger slices in, boiled them from a few seconds and turned the element off. I did this simply because I felt safer pickling it this way, and the result was great! I stored the gari in a glass jar in the fridge for one week before using it, now it is about two months old, almost finished, but still very good. 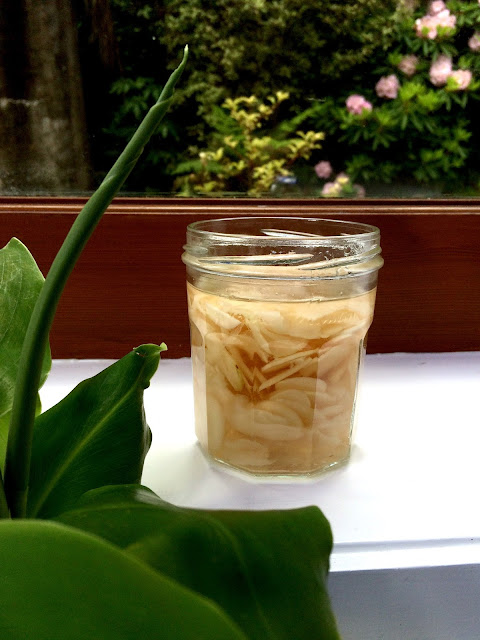 The original colour is a very light pink, which I like very much as it feels natural to me. The second pink, very vibrant, I made by soaking my own made gari for just a few minutes in the brine of shibazuke, which is a Japanese pickled mix of cucumber and eggplant and red shiso. It is the red shiso that gives out the pink/magenta colour, so anything picked with this leaf will work (and pickles also have plenty of brine left over, which I never throw away but use to colour rice.

Waste not waste not, this is my motto!

I have to say that I was very happy with the results for taste, texture and ... colours! 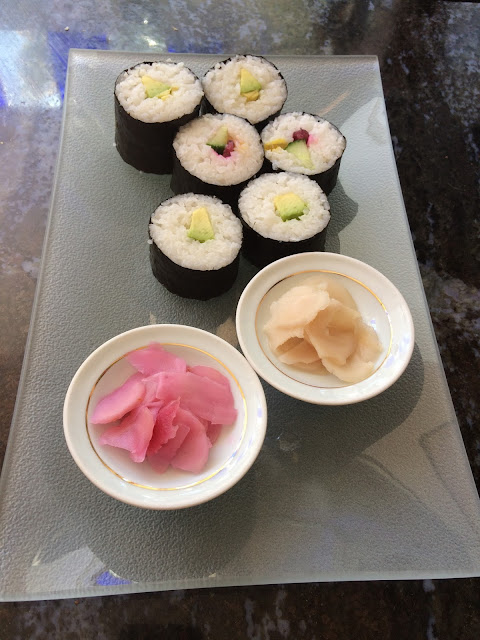 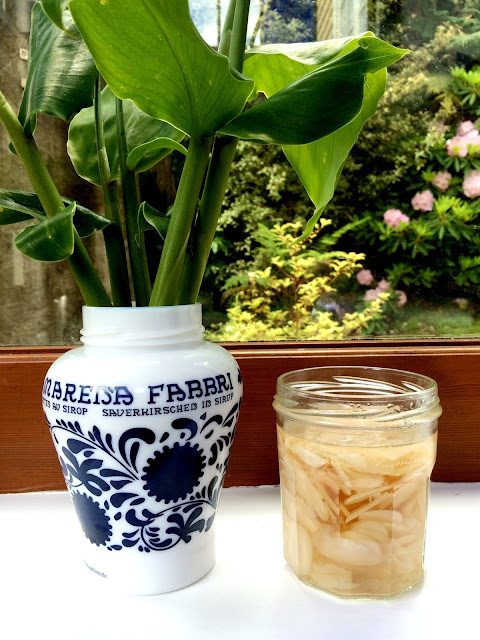 Posted by Alessandra at 4:18 PM

Email ThisBlogThis!Share to TwitterShare to FacebookShare to Pinterest
Labels: From the Garden, Gari, GInger, Gluten Free, How to make..., Japanese, Japanese Food