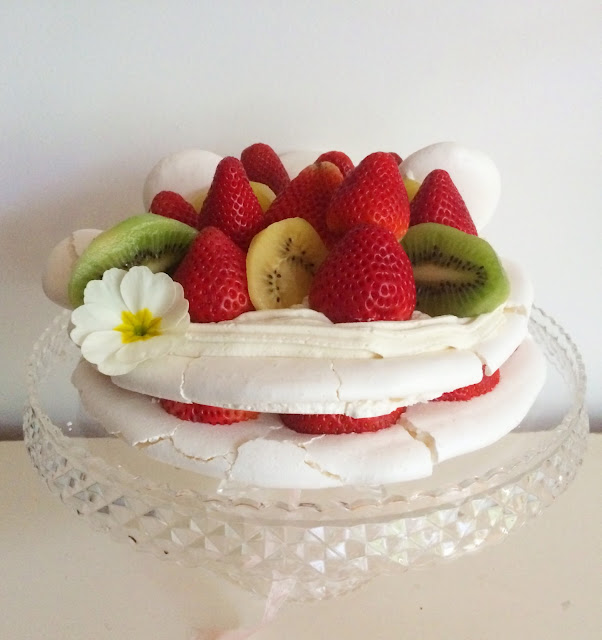 First a confession: I am not a fan of Pavlovas, not at all. But I love meringues, and ever since I have heard of the aquafaba meringue, or meringue made with the water from a can of chickpeas (very popular in Italian blogs, and not necessarily Vegan blogs, everyone is making it!) I couldn't stop thinking about it!

Well, what a success!! Basically all you need to do is to drain a can of chickpeas, keep the liquid and then beat it. Don't do it by hand though, unless you have strong harms, it takes longer that egg whites. But wow doesn't it peak! And white and fluffy too! I got quite emotional seeing it, like a wonderful chemistry experiment.

But what to make first?  I was tempted to make an Italian meringue, but didn't want to add hot syrup to my new discovery, in case the magic stopped! No, I decided, I'll do that next time and stick to a easy icing sugar meringue.

There are plenty of recipes online to chose from, and then I saw one for a Vegan Pavlova, Pavlova of course being a loose term overseas, but there you go Kiwis, karma for having far too loosely reinterpreted too many Italian (and other nations) traditional recipes! This particular recipe was my top choice and had nice photos, but looked like a tree-layer meringue to me. Also I changed a couple of ingredients and quantities, and recorded:

Topping
1 can coconut cream
1 tsp golden syrup
a few drops of vanilla essence
Green and gold kiwi fruit and strawberries (out of season, but I saw two punnets for $7 and wanted them for the photo!)


Beat the brine first, then when it is nice and peaky add the sugar, one tbsp at the time, and the cornflour. Add the vinegar and vanilla at the end and beat some more. 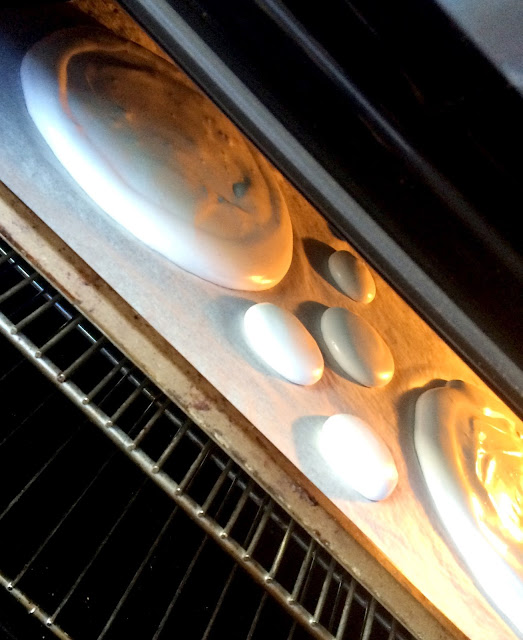 Not confident enough to try a single Pavlova I made two disks, plus some little ones to see how they baked. I had the oven on first very hot, and the at about 75°C fan for about three hours, actually more, it seemed to take forever! In the meantime I also whipped some coconut cream (Vegan Pavlova, remember?), I find that the Family Choice coconut cream has the thickest cream of all, in fact so thick that you don't need to refrigerate the can first, and can use the liquid a the bottom of the can to thin it down. I added a tsp of golden syrup (Maple syrup is good too) and a few drops of vanilla, and then set the cream aside in the fridge.

I didn't end up assembling the 'Pavlova' until the day after, but the meringue was still good and the cream nice and stiff. I only put fruit in between the two layers, and reserved the cream only for the top. Possibly the disks were too large and they cracked a little, the smaller meringues looked great and made me plan for macaroons. 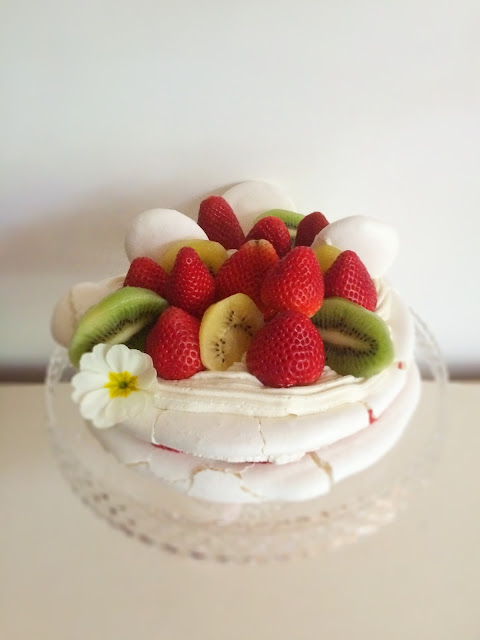 Ok, I don't like Pavlova… but I loved this one!!!! Wowowowow! My daughter loves Pavlova, yet she found this version to be better, and my husband liked it and thought that it was less sweet that regular Pavlova (I can hardly believe it, with 250g of icing sugar??? Really? I was already planning to experiment with less sugar….). Also the texture, no, not a crunchy meringue all way through, but a soft marshmelloy centre, and even if it was in two disks it still tasted more like a Pavlova than a meringue cake.
But there will be more experiments, for sure! 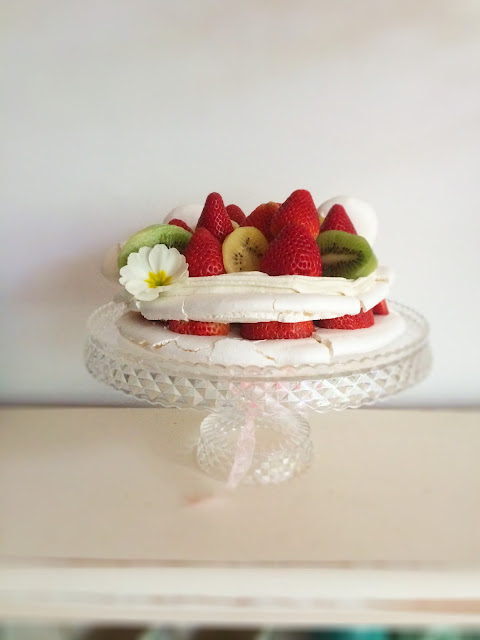 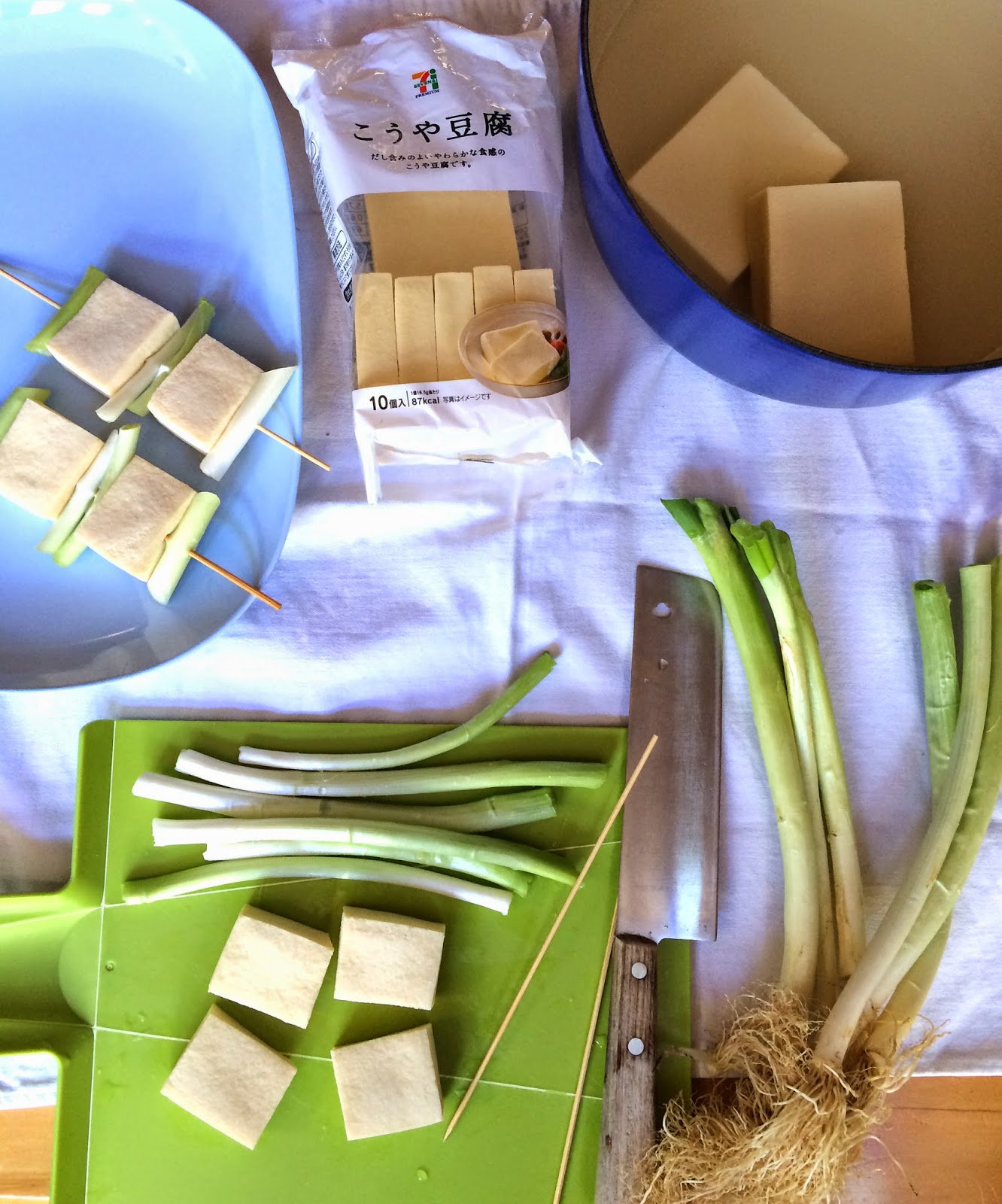 My friends Astuko and Hideko often send me this dried tofu which I find super versatile! I just soak it in water (or stock) and then use it in a variety of dishes. This time I just soaked it in water and then cut each blog into four pieces, and put them in a skewer (soak the skewers too!) with some spring onions.

I sautéed the skewers on both sides with a little rice bran oil to which I added a few drops of sesame oil, then I brushed the tofu and spring onions with a sauce made by simmering a teaspoon of sugar or with two tbsp of water, two of soy sauce (gluten free please use tamari) and a pinch of freshly grated ginger. I turned the skewers over one more time and then I served them, hot and yummy! The scrapings from the pan were delicious on plain rice too! 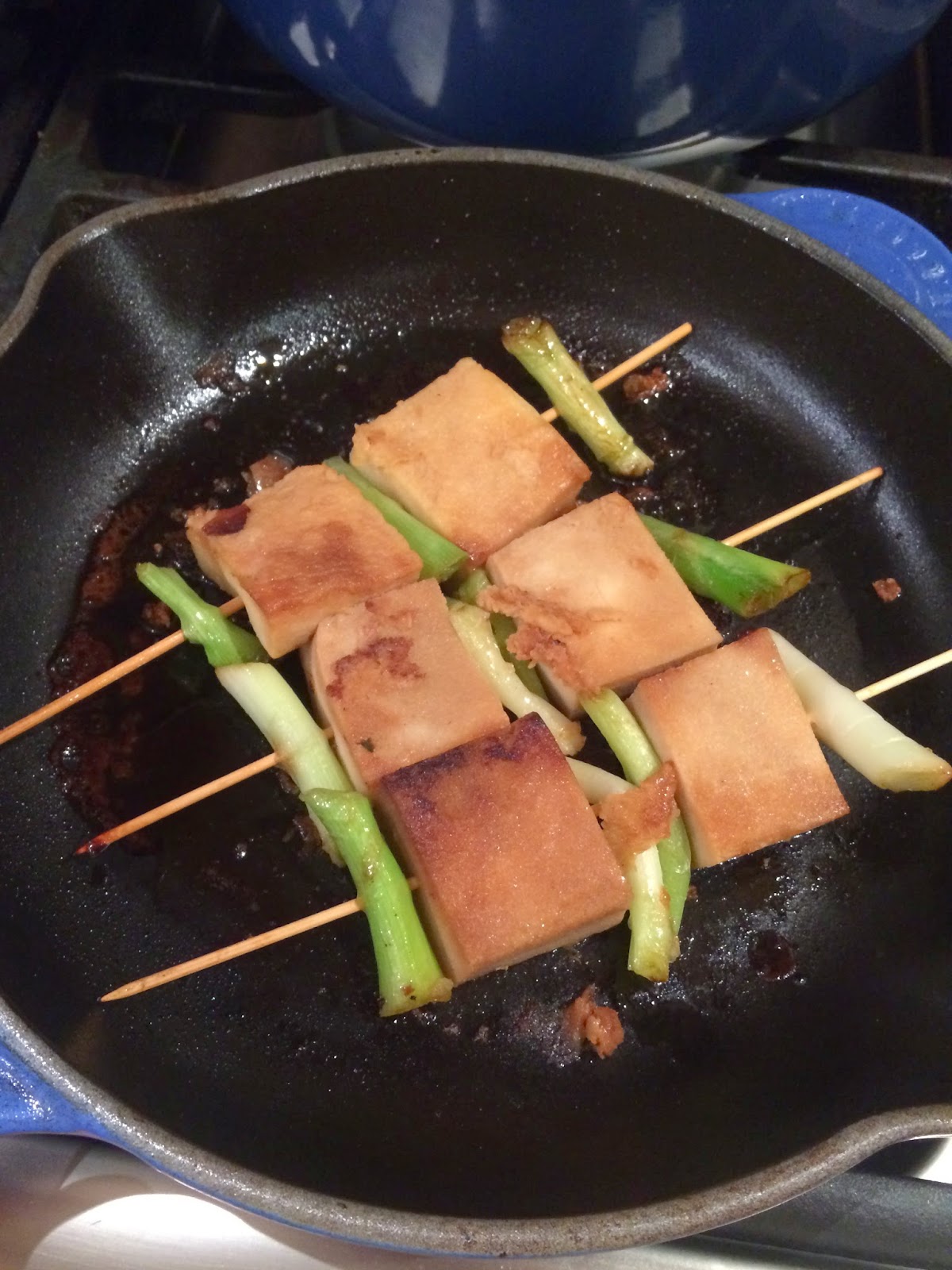 Potatoes and carrots with sage, rosemary and garlic 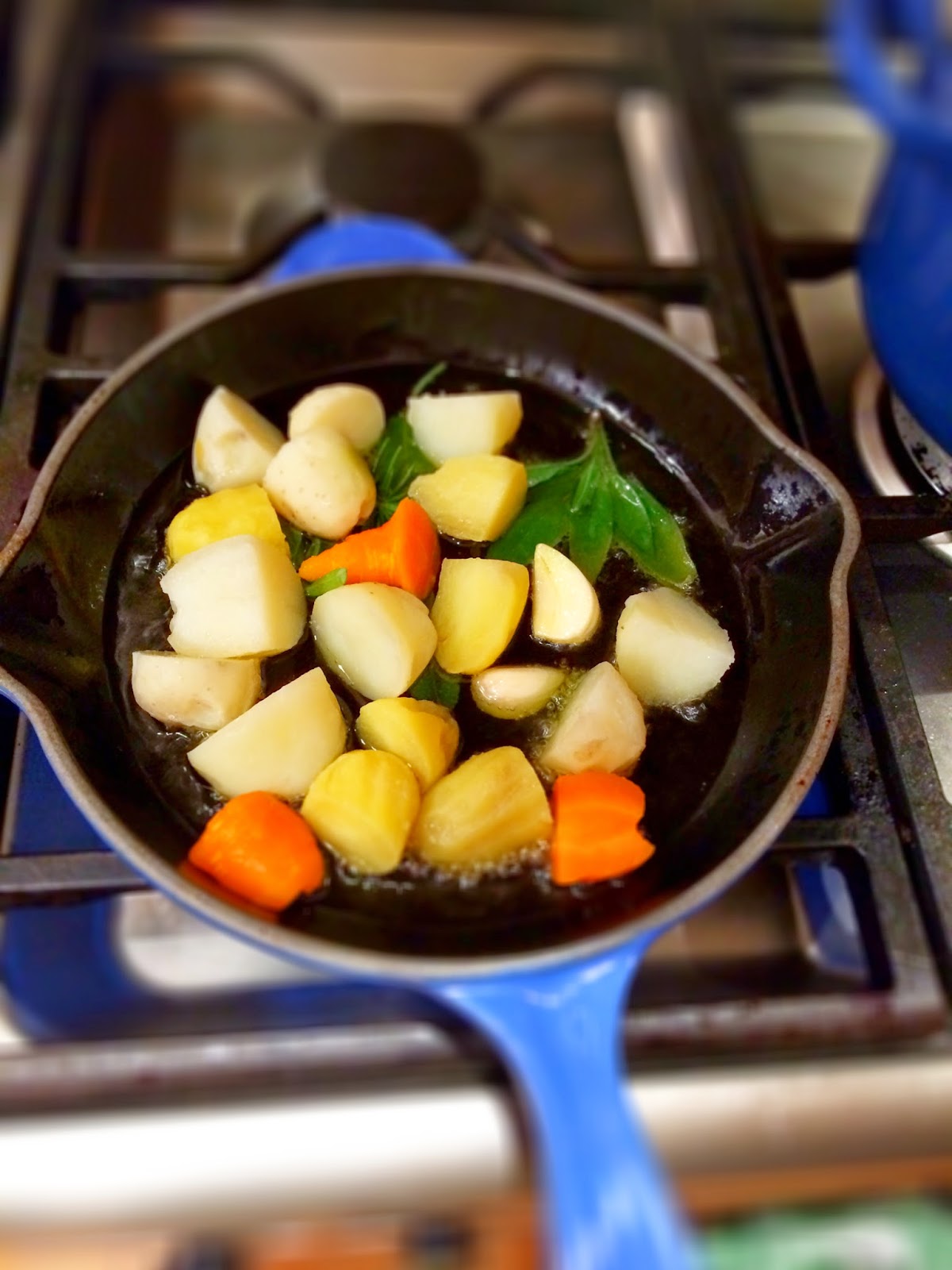 Digging up the garden I pulled some ugly carrots and a few potatoes (white and yellow). I cleaned them and boiled them until cooked but firm, then I remove the skins (from the carrots too!) and sautéd them with olive oil, garlic, sage, rosemary and a pinch of salt. Really simple but super tasty!!

Posted by Alessandra at 1:21 AM No comments: 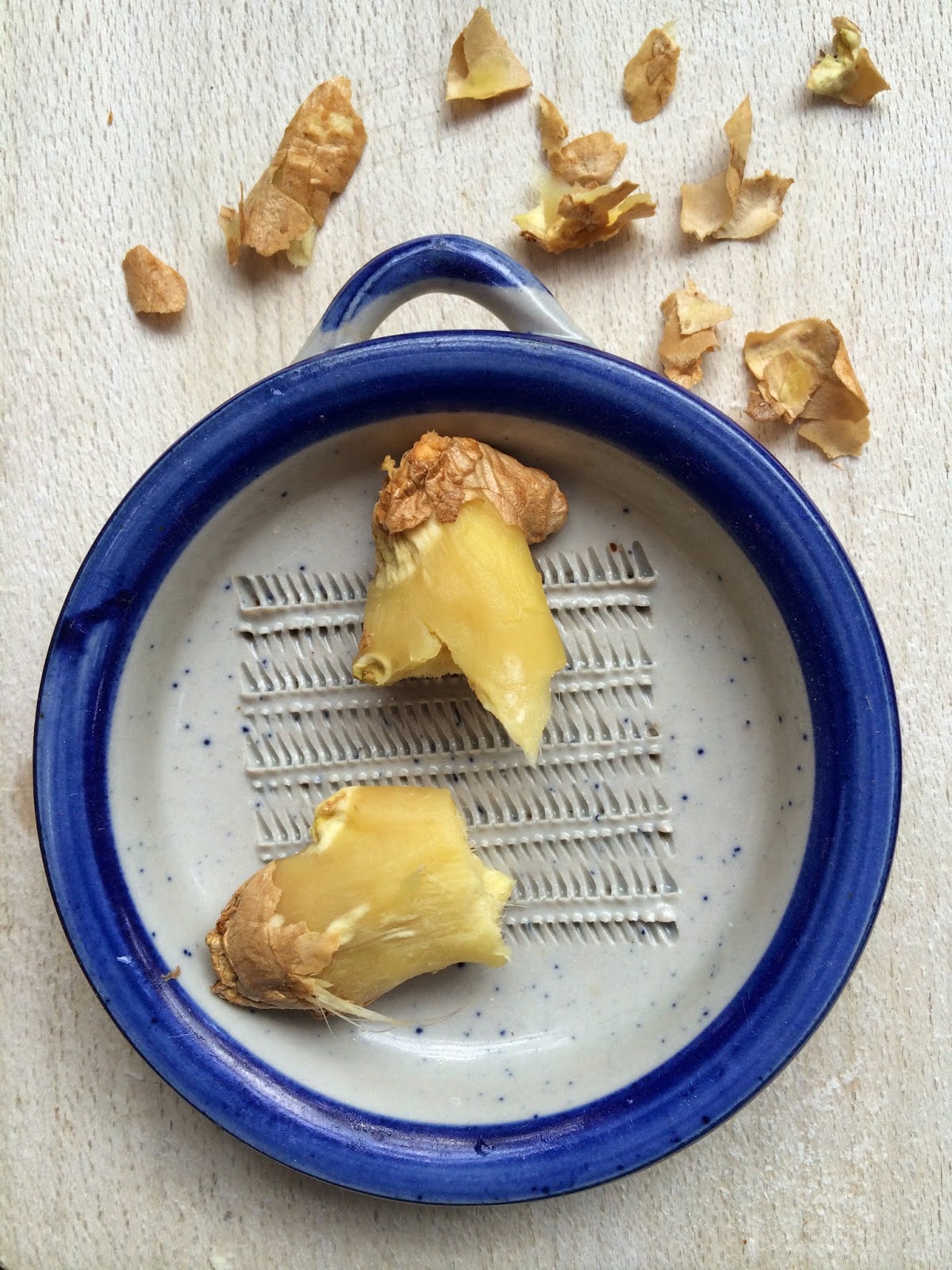 This I discovered by chance, and I am sharing because I love grated ginger but I never knew how to peel it, except with a knife. But this only works with frozen ginger. I always have frozen ginger, when I buy some I use a bit and then I put the rest in the freezer and break out what I need from time to time (broken roots in the fridge dry up, and in my kitchen sprout, so the freezer is my only option). Today I took out a piece and I made an incision with a knife to break it. But because it was so hard and frozen I threw it in a bowl of water where I was soaking some mushrooms and dried tofu. After five minutes I took it out and the peel just started came off!
I could not believe how easy it was, this is going to be my frozen ginger peeling method from now on (just water, I don't think that the mushrooms and tofu had anything to do with it!)
This is also great for juices :-)

Email ThisBlogThis!Share to TwitterShare to FacebookShare to Pinterest
Labels: Asian, GInger, Gluten Free, Japanese Food, Raw, Spices, tips
Newer Posts Older Posts Home
Subscribe to: Posts (Atom)
This blog is dedicated to restaurants, cafes, airlines, schools, and anyone who cater for others. A good Vegan meal is a right, please offer it.