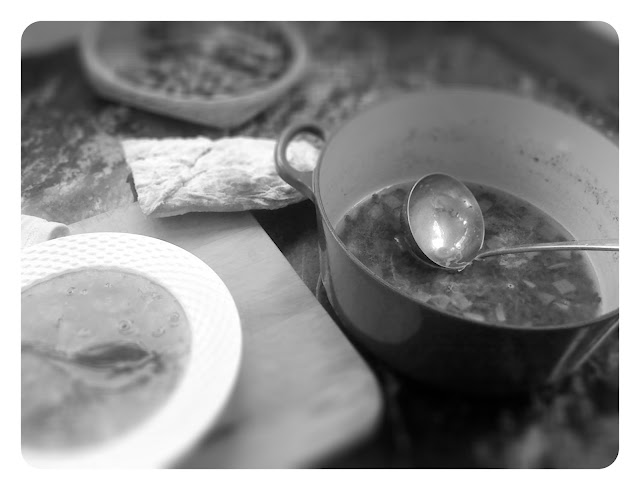 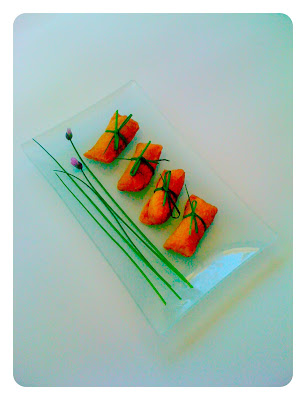 I really really like the fried tofu parcels used to make oinari-san, I wouldn't know how to make them, a Japanese friend told me ages ago, but it seemed quite involved... maybe one day, but for the time being they can be bought in Japanese/Asian stores :-). This pack contained 16 tofu parcels. 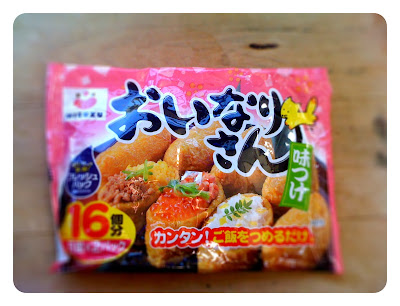 The parcels are usually filled with sushi rice, but they can also be uses as "containers" (see the image on the packet) and I really liked this brand: not a single parcel broke when I was opening it! I decided to used them with rice and asparagus. The asparagus were simply steamed, and then I cut them and placed then in a bowl with the liquid of the tofu parcels (they are sealed in an sweetish sauce which I thought was a waste to discard). 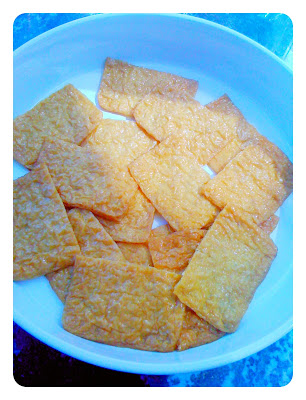 Wash the sushi rice (or Japanese rice) several times in cold water, until the water runs clear, and then cook it by absorption. The doses are about 1 and 3/4 (three quarters) cups of sushi rice for 2 cups of water, but that depends on the type of pot. You need a pot with a good lid, or you will loose too much steam. I kind of regulate myself by ear now, since I know my pots and pans. Bring the pot to boiling point, lower the heat and simmer until all the water has been absorbed. Once the rice is ready pour it into a bowl and stir it with a wooden spatula, cooling it with a fan if you can. I then add some ready made sushi vinegar, about 2 tablespoons, but this is my personal taste. If I don't have sushi vinegar I use 2 tbsp of rice vinegar, a little sugar and a little salt (to taste, and I don't like to use too much sugar or salt!).

I filled the parcels with rice and asparagus and wrapped them up with a chive. 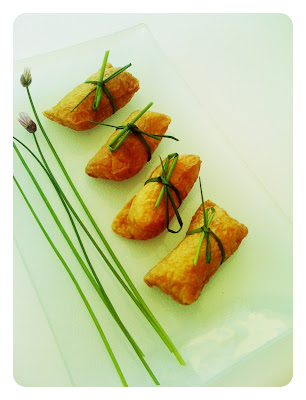 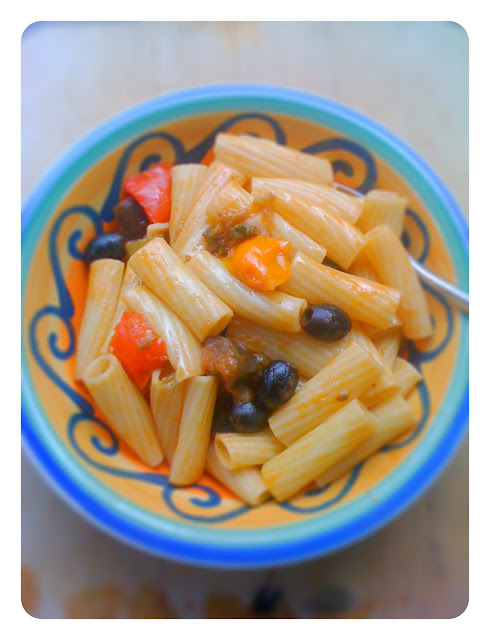 The sauce is a bit like a caponata, or at least, the caponata that I make! Eggplants and capsicums are more affordable now, and are among my favourite vegetables:

Cut the eggplant into cubes and sweat with salt for 30 minutes. Rinse well. Cut the capsicums into cubes as big as the eggplant, and the celery cut into thin slices, if using. Place all the veggies plus the garlic into a pot that can be covered with a lid, add the olive oil and sauté for a few minutes, then cover and simmer on low for about an hour, adding a little water from time to time and stirring often. I usually add the olives, capers (rinsed) and salt halfway through the cooking (actually, I add them when I remember...) and cook until the eggplants are mushy and the other vegetables really soft. Cook the pasta al dente (I used rigatoni) and dress with the vegetables, adding a little more olive oil at the end. I love this pasta :-)!

I was not sure if you post this or not... I roasted some veggies, pumpkin, potatoes (previously boiled but not too soft) and orange kumara with red onion... everything was drizzled with olive oil and the first two were seasoned with salt, smoked paprika, garlic, cumin seeds and just a little chili. The kumara and red onion just had salt and olive oil, and once baked I added some Aceto Balsamico Tradizionale di Modena. Everything was so yummy, but ... by mistake I must have deleted the image with the roasted veggies! I looked for it on my phone, it was gone, completely gone! I think that these days I am taking far too many photos with my iPhone, and to make space I need to delete a lot of them, and sometimes I delete them before downloading them!!! Yes, it is not the first time that something like this has happened :-(. Does it ever happens to you? And does anyone know how many pics I can have on my iPhone at any moment? I am so scared of overloading it... thank you and enjoy the pics of the 'raw' vegs! 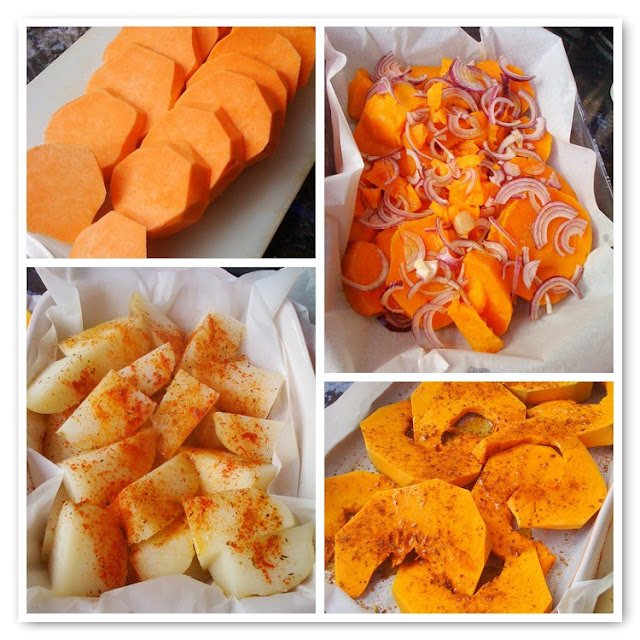