Spring asparagus steamed over a vegetable soup and served with flowers 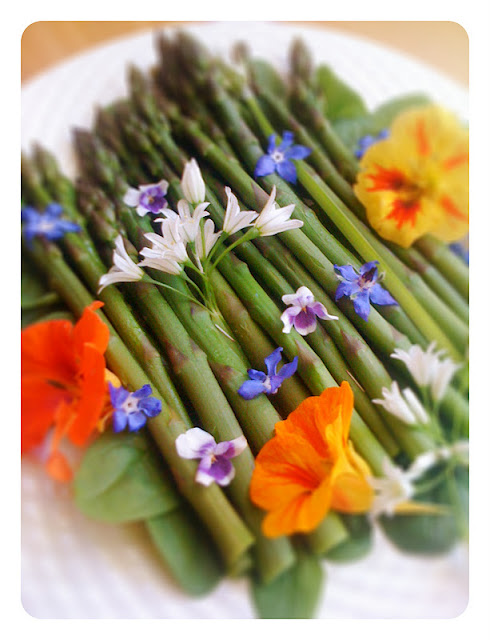 Lots of people know by now that I eat flowers, but still, some think of it as a bit of a freak thing to do. But if you have a few edible flowers in your garden (absolutely organic, no sprays allowed) they just make your dishes look so pretty, and they are not merely a decoration, they can have flavour and fragrance too! I used onion weed flowers, which have a mild garlic/oniony taste, and nasturtiums, which are probably the only flowers that the general public in New Zealand seem to consder edible (some claim to use them in salads, but in all these years here I have seen more trendy talk than action, and still far too much coleslaw). My first borage flowers and a few little violets added perhaps little taste, but they are eye catching with their blue hues, and welcome on my plate anytime. 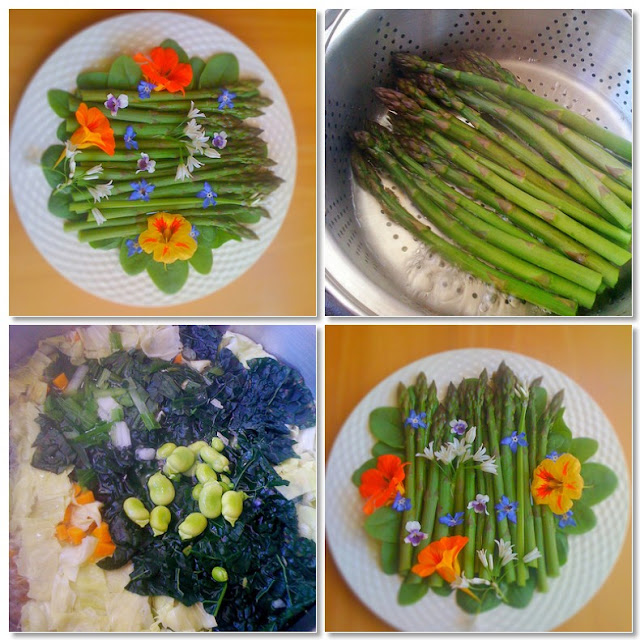 On a large plate I prepared a bed of baby spinach leaves and then I steamed some asparagus. To save time and gas I steamed the asparagus over the vegetable soup that I was cooking for dinner (so that I could make lunch and dinner at the same time). I meant to photograph the finished soup too, since all the veggies come from my garden, but I forgot. Anyway, it had my last cabbage, carrots, celery (mostly leaves), cavolo nero, broad beans (they are here, finally!) and onion weed (of course). It was a lovely soup, and I just had to add pasta and seasoning, all the rest was from my garden. Anyway, back to the asparagus salad: after steaming the asparagus I rinsed them under cold water and placed them over the spinach leaves. And then I added the flowers. For dressing I just added salt, extra virgin olive oil and Aceto Balsamico Tradizionale di Modena. I also think that a simple Japanese miso and sesame seed dressing like this one could go well. This was a light but satisfying lunch for two. 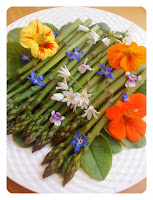 Posted by Alessandra at 2:35 AM