I have a few fennels growing in the garden and the other day only two were big enough to pick. They were certainly bigger than those 'bambino' fennels I see in the supermarkets here in New Zealand, but not as big as the ones I used to get in the markets in Italy. I had to find a way to make them go ... further! So I decided to cook them with bok choy (the only other vegetable really 'active' in my veggie garden), hoping that the strong fennel taste would take over. 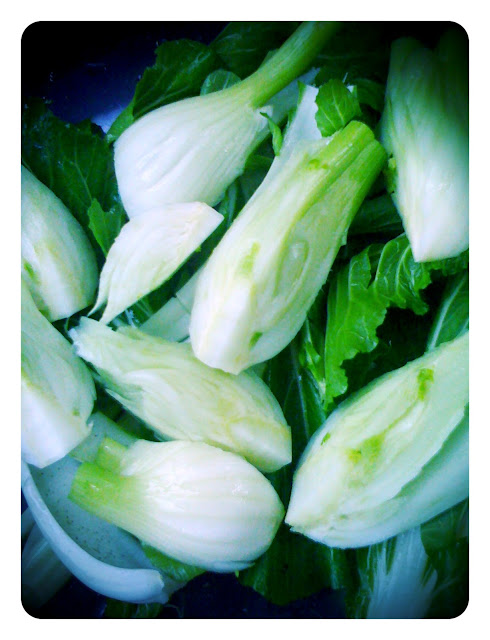 Surprisingly enough it worked! I guess that this was a sort of 'Fusion' experiment for me, and I wonder if in Chinese cuisine fennels are ever paired with bok choy. Do you Know??

Anyway, for the recipe: I washed and cut the 2 fennels and 1 bok choy and cook them in a pan with just a little margarine, (not olive oil for this dish) then I added some vegetable stock, covered them with a lid and let them simmer on very low for quite a long time. About one hour. Slow cooking is best with fennel (unless you eat them raw), they have to become really really soft, and the bok choy kind of took in the good flavours too.
Serve hot, as a side vegetable.