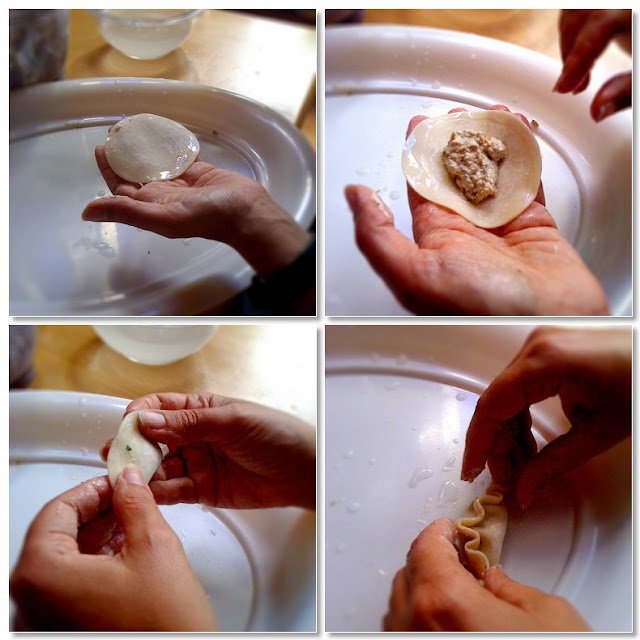 I love this type of dumplings, for the filling I use what I have at hand really, but generally the base is tofu, Chinese dried mushrooms, soaked and boiled first (keep the broth for later) and fresh coriander. For flavouring I used sesame oil, soy sauce and a little fresh ginger. Blend everything into a smooth paste. 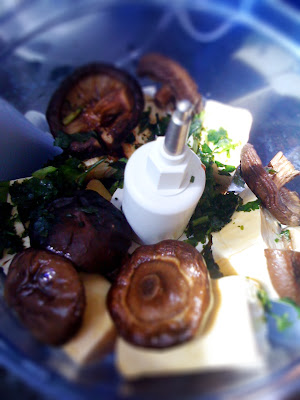 The folding is easy if you are doing it with friends. The fact is that after the first ten I got tired and bored, and I had 50 more to do! So I didn't make some particularly pretty ones to look at! My son loves them, and I wanted to make him fold a few ("so that you can learn darling!"), but he politely declined saying that he was going to take some photos of me making them instead (he is so good at finding explanations!).  One of the things I do when folding the ready bought dumpling disks is to wet the borders with water so that they stick well. And then I dip (lightly) the bottom of each dumpling in a plate lined with vegetable oil. In this way the dumplings don't stick to the tray, and then to the pot (even if they are supposed to be 'pot-stickers'!)

Easy step by step images (this time by Arantxa, they are from this post) 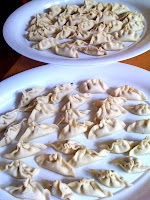 These can also be simmered in broth (I always make a little broth for a just a few, just simmer them until they come to the surface and then they are ready!) or steamed in dumpling baskets. I learned the  pot-sticker method in Japan, where these are called gyoza (but have meat inside).


Cook the dumpling in a very hot pan, and as soon as the bottom has started to brown turn them and brown both side as well. Then cover with a lid and let the steam finish the cooking for a minute or so. At this stage I do add a spoon or two of water or, even better, the stock left over from cooking the mushrooms. 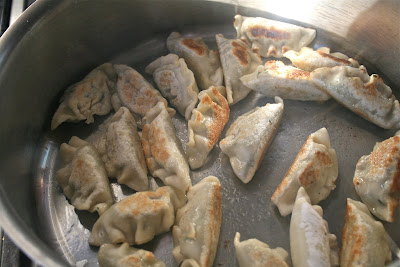 Serve them hot! They can be eaten with chopsticks or fingers, dipped in sweet chilli sauce or soy sauce,  Max had about 25! 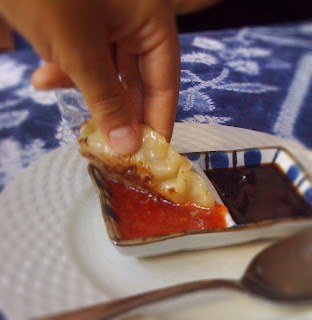