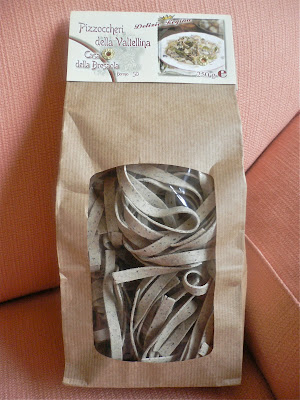 Pizzoccheri is a traditional pasta from Valtellina, in the North of Italy, made with a percentage of buckwheat flour. The taste is similar to the Japanese buckwheat noodles (soba).
The traditional recipe for pizzoccheri, born in the village of Teglio, is to boil them together with pieces of potatoes and green cabbage (put the potatoes in the biling water first, then the cabbage and the pizzoccheri (which take about 15 minutes to cook). Pick up everything with a slotted spoon and mix with casera cheese and butter melted with garlic. Very filling! A vegan could stop at the cheese and butter steps, adding a little tamari sauce instead, and the stock from the pizzoccheri can also be recycled in real Zen style as it is full of proteins. But I didn’t feel like going for Asian flavours.
So I made mine with onion, potatoes, spinach and walnuts.
Ingredients
500 g pizzoccheri
1 small white onion
4 tbsp extra virgin olive oil
1 big boiled potato, peeled
1 bunch spinach leaves, washed
1 handful freshly shelled walnut kernels
salt and pepper to taste
Cook the pizzoccheri in plenty of salted boiling water according to packet instructions. Finely chop a white onion and sauté with two tablespoons of extra virgin olive oil. Add the boiled potato, cubed, and after a few minutes the spinach leaves and the walnut kernels. Add a couple of ladles of the water from the pizzoccheri and cook until the potato pieces start to mush. Add salt and pepper to taste. By this time your pizzoccheri should also be ready, drain them (keep the water if you like for later use as a stock), and place in the pot with the potatoes. Add two more tablespoons of extra virgin olive oil, stir and serve.
Serve 4 as a complete meal, very filling!!! 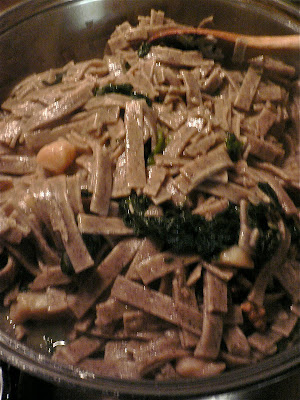