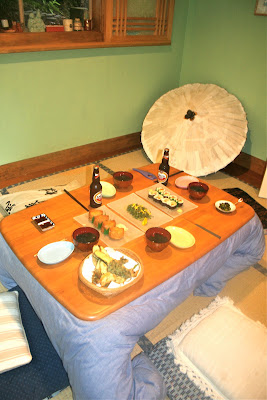 I love Japanese food, it is light and filling at the same time. It may take time to prepare, but it gives me great satisfaction, a sense of peace, and the whole family enjoys sitting at the low table, in our Japanese room, especially the children. This is a very simple fare really, it is just that 'Japanese' seems always more sophisticated: food has to look pretty, no matter what. Even a simple bowl of plain rice, served in the right atmosphere, would satisfy me! So, here we go: 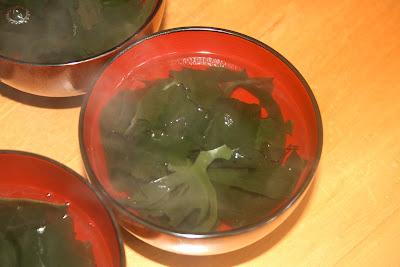 Gently scrape the kombu seaweed with the tip of a knife. Place it in a saucepan with 1 litre of water and gently simmer (simmering, not boiling) for 30 minutes. Turn the heat off and let the soup stand for 30 minutes to 1 hour (the longer the better), then remove and discard the kombu. Gently bring the soup back to a gentle simmering and add the wakame. Simmer for 5 more minutes, and serve. This soup doesn't need salt, or anything else, the broth remains clear and the taste is delicious!

I find cooking rice for sushi challenging: you need to buy proper sushi rice and then wash it several times in cold water, until the water runs clear. And then cook it by absorption. The doses are about 1 and 3/4 (three quarters) cups of sushi rice for 2 cups of water, but that depends on the type of pot. You need a pot with a good lid, or you will loose too much steam. I kind of regulate myself by ear now, since I know my pots and pans. Bring the pot to boiling point, lower the heat and simmer until all the water has been absorbed. Once the rice is ready pour it into a bowl and stir it with a wooden spatula, cooling it with a fan if you can. I then add some ready made sushi vinegar, about 2 tablespoons, but this is my personal taste. If I don't have sushi vinegar I use 2 tbsp of rice vinegar, a little sugar and a little salt (to taste, and I don't like to use too much sugar or salt!). I used the rice to fill some inari (Japanese tofu pockets), which you can buy already made from Asian stores. This time I also put a piece of avocado inside each inari, but this is not exactly 'traditional'. 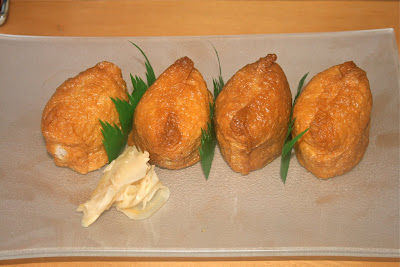 And then I made some norimaki (large rolled sushi). To be honest this is not my best rolling, but it wasn't planned either! The truth is that there were 8 inari pouches in the packet, but I broke 4 trying to open them :-P!! I made a bit of a mess, not something to photograph! The children and I ate them while we were making them. I quickly rolled the reaming rice with a sheet of nori seaweed, and fill it with avocado, cucumber and red capsicum strips. Serve with wasabi, pickled ginger and Japanese soy sauce. 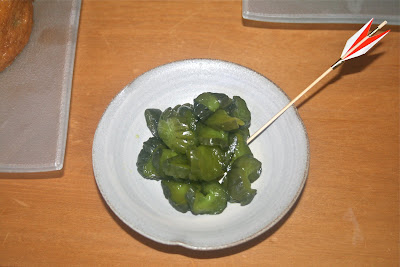 This was the easiest thing: I just bought it! Japanese pickled cucumber, crunchy and refreshing. 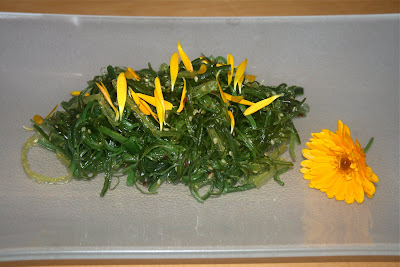 I found a punnet of seaweed salad in the Asian store, ready to eat. I rinsed it (just in case), and I made a dressing with:
2 tbsp Japanese rice vinegar
1 tbsp Mirin (sweet cooking sake)
1 tsp toasted sesamy seeds

and decorated the salad with calendula petals. 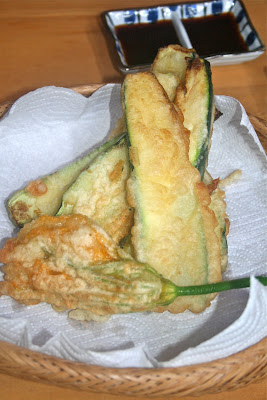 For a Vegan tempura batter just mix a bit of flour with some chilled beer. If you don't drink beer use some chilled water (better if sparkling). Do not over-soak the vegetables in batter, just a little dip is enough, and make sure that the oil is very hot before frying. I used rice bran oil. The zucchini and flowers are from my garden, the fresher the better, I just added a sprinkle of salt before serving them. I did have some batter left and so, after taking this photo, I used it up to fry up some borage flowers as well (maybe you can see them in the first photo). They were lovely! 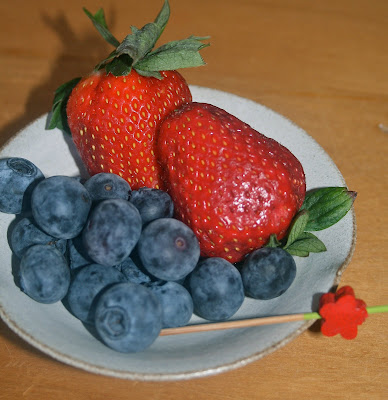 Usually after a Japanese meal the only sweet thing served is seasonal fruit, so that was also easy ;-)