My thin cut roast potatoes looked like Matryoshka dolls, so I decided to "dress them up".
What do you think?

Tofu Scaloppine with wine and parsley, and thin roast potatoes 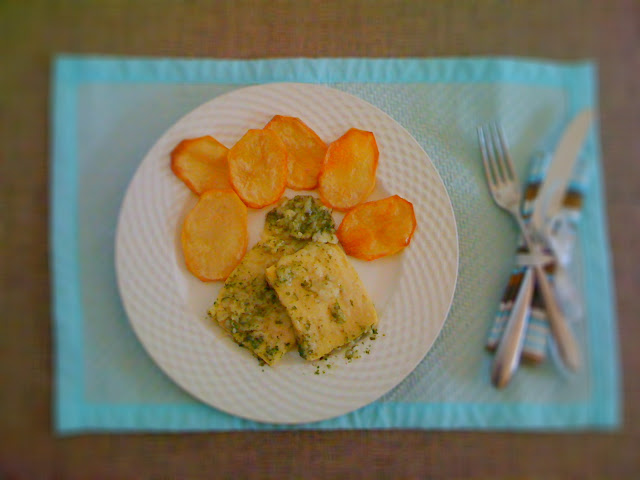 Tofu Scaloppine with wine and parsley, and thin roast potatoes


I used 4 dried blocks of Japanese tofu: first I let it rest in 500 ml of warm vegetable broth to rehydrate, then I cut each piece into two thinner slices (scaloppine must be thin) and pressed them well to get the extra stock our (keep it, you will need it later!) and flatten them a bit more. I passed the slices in flour, and then placed them in a pot with plenty of sizzling melted vegetable margarine. A quick sauté on both sides, and then I added a good glass of white wine. Once the wine was absorbed and the scaloppine had been turned around a few times I scraped the bottom of the pan (you may need to remove the scaloppine to do this, I didn't) and added the leftover vegetable broth. I simmered everything until I had a thick sauce, then I added salt and pepper to taste, and plenty of (bought) chopped parsley. 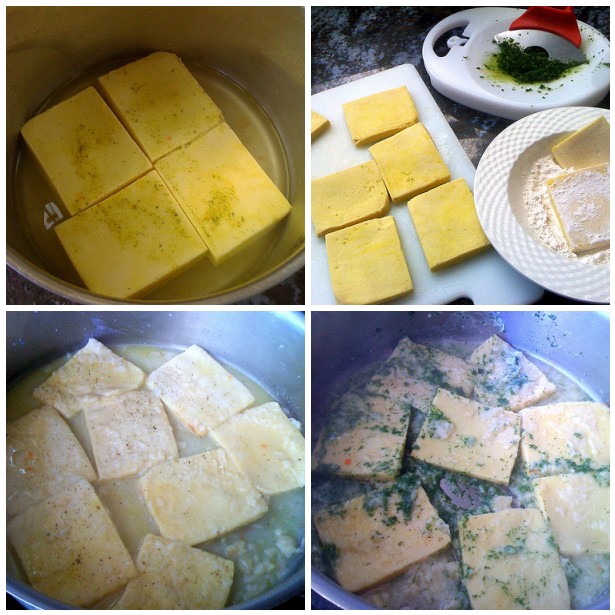 To accompany the scaloppine I made some thinly cut roast potatoes, (simply brushed with olive oil and salt only and roasted until crisp) and it was such a nice, vegetarian, main!!


Photos and Recipes by Alessandra Zecchini ©

Persimmons: the Italian way and the Japanese way 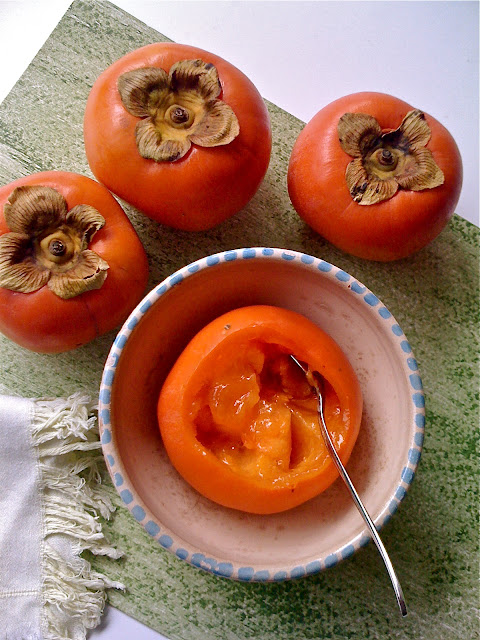 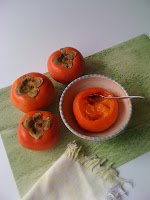 I have fond memories of eating cachi (Italian for persimmons) as a child in Italy. Ahhhh delicious sweet cachi, from October to December, always so soft that they were bought in trays from the fruit vendors, and then Mum would put them in a bowl, give us a spoon, and let us enjoy the runny soft flesh. Then at 19 I went to live in the UK, and for 6 years I had no persimmons, with one exception. To be honest I could not believe how little fruit they had in the UK (back then), every house I went in seemed to have only three types of fruit: oranges, green apples and bananas. Berries and stone fruit were luxuries and mostly used canned, or to top desserts. There was exotic fruit but mainly in fruit baskets given as presents (with the exception of the previously mentioned bananas, and the occasional pineapple). Persimmons were probably considered exotic too, although things may be different now. During those six year the only time I saw them was when a friend, married to a Japanese lady and with a catering business (so he knew where to get unusual fruit) offered me some. I didn't even know the English name, but I discovered that the Italian name cachi sounds like the Japanese name Kaki. And then I was surprised to see that the kaki where hard, not soft, and cut into slices and peeled.
Definitely a different variety, I thought: hard cachi were impossible to eat in Italy, as they tasted really unripe. I did eat my slices, and they were nice, but then I left the remaining kaki that my friend gave me to ripen fully until soft enough to be eaten with a spoon :-). They were smaller and tasted a bit different from the Italian ones, but they were still good, and a real treat (although my English boyfriend was disgusted by my way of eating them). 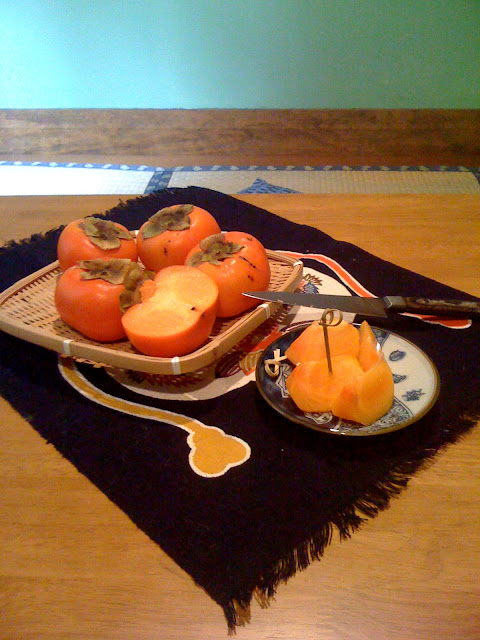 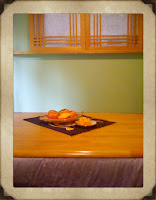 After London I went to live in Tokyo for three and a half years, and I had plenty of kaki there! I learned to eat them the Japanese way too, and yes, I do enjoy them, and occasionally I still eat them cut into slices (especially if I eat them on the low table in my Japanese room, something nice to do in Autumn and Winter). In Italy my aunt has two persimmon trees, one for soft and one for the smaller, Japanese type that can be eaten hard. But I still prefer the soft ones, (and so does my daughter).

A funny story now:
In Tokyo I lived in front of a tiny greengrocer shop. When kaki were in season I checked from my window the colour, to assess the ripeness. I learned that yes, some Japanese did eat them with a spoon also, but mostly they just like them sliced and peeled, so the over-riped and soft didn't really sell. As soon as the kaki looked soft enough I went out and started my bargaining with the old greengrocer.
"They are a bit soft, aren't' they?"
"Yes, but they are still very good! You can eat them with a spoon!"
"Mmmh"
"What about 100 yen for the lot?"
"Ok!"
The bargaining was purely ceremonial. Of course he worked out pretty quickly that I like them soft, (I didn't buy any other fruit or vegetable that looked old or over ripe, even when he tried to sell it to me) so much that the days I failed to notice soft kaki he would call out to me:
"Hey, honorable foreigner, I have some soft kaki for you!"
"Mmmh, so you have..."
"What about 100 yen for the lot?"


Posted by Alessandra at 1:53 PM No comments: 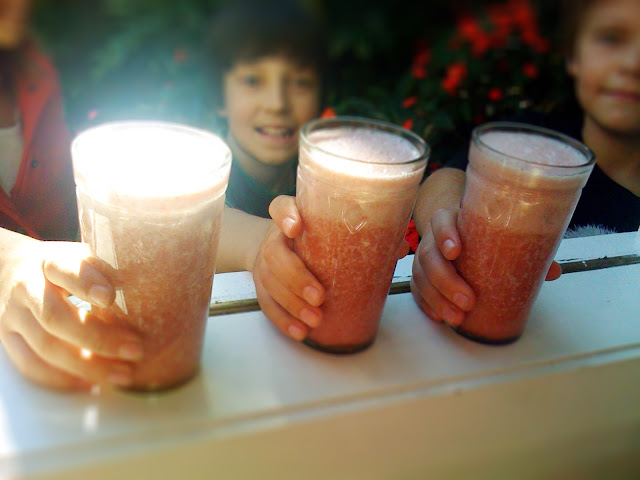 This is too easy and yum!!! And how often do you get plums in your smoothie?

Posted by Alessandra at 1:16 PM No comments: