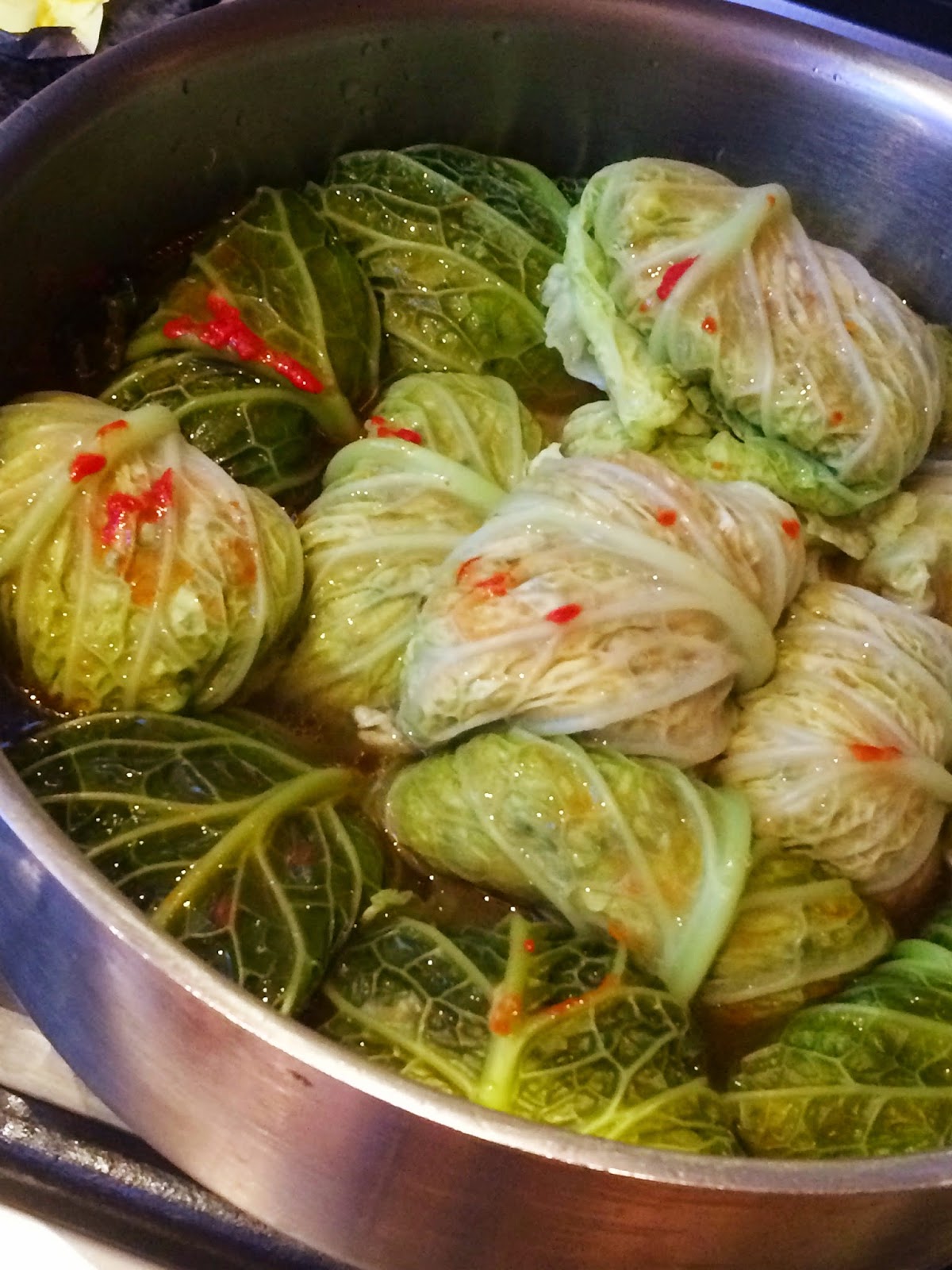 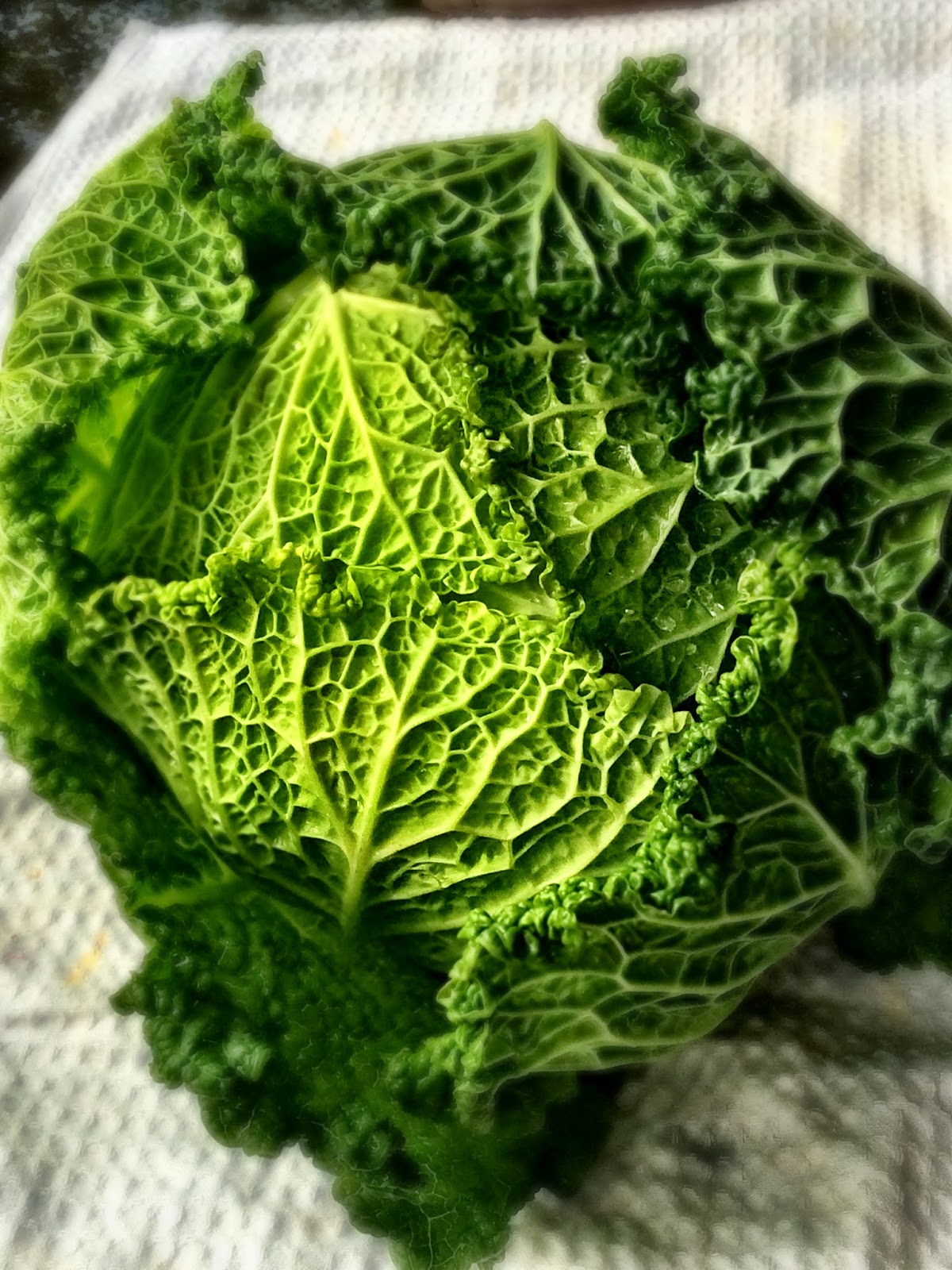 Cabbages are cheap and healthy, and when I buy one I can cook with it for a family of four for three days! Usually I start with cabbage rolls, to use the larger leaves, and these can be done in a zillion ways! There is another  good Vegan recipe here, but today for the filling I used stale bread. But first thing first:

Wash the cabbage leaves (the bigger outer leaves, about 15, and steam or boil until soft but not too soft! In the meantime put one onion, one carrot, two celery sticks with leaves and a little parsley in the food processor and mince. 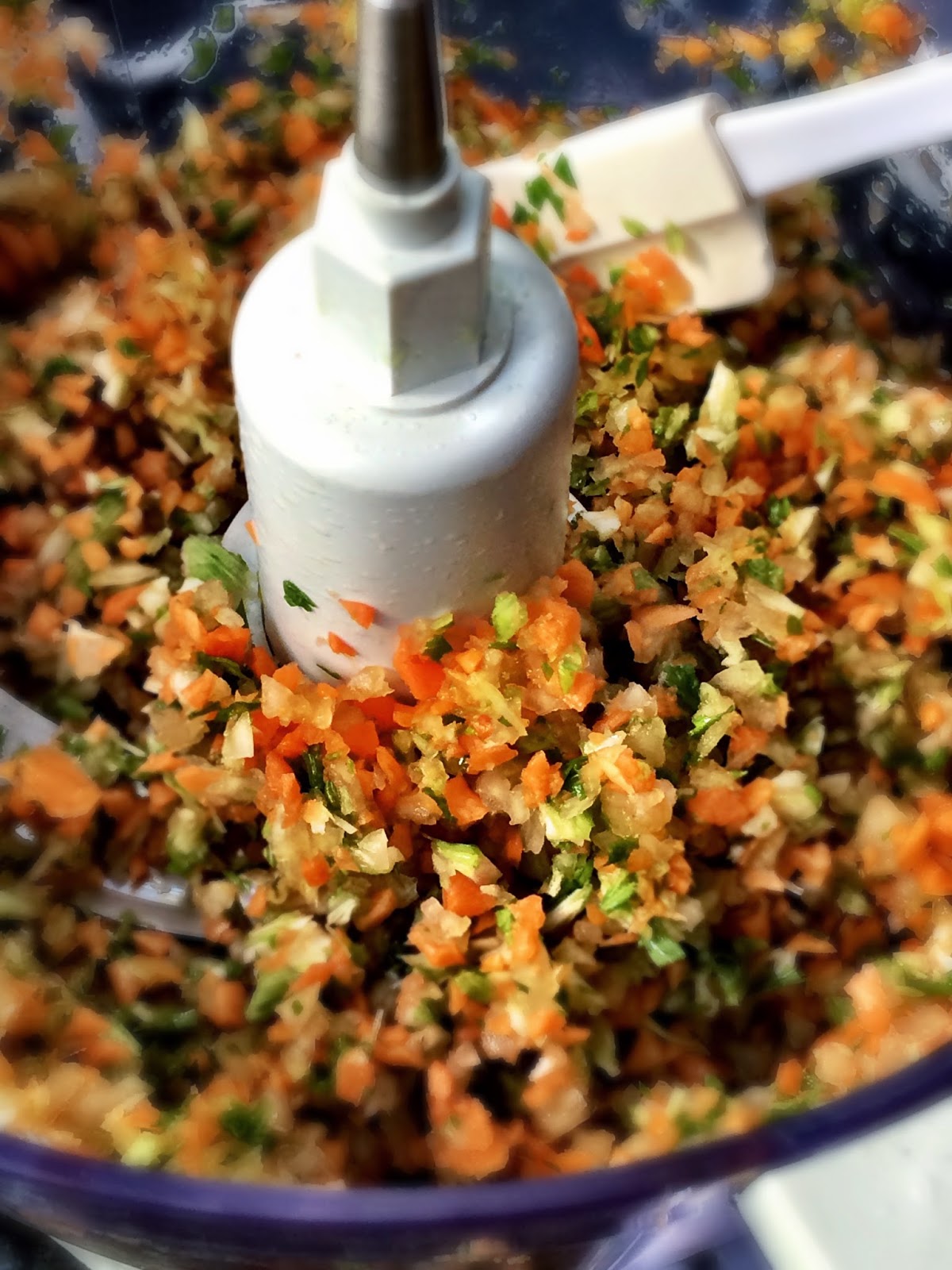 Heat two tbsp of olive oil in a pan and sauté the vegetables, stirring often, for 10 minutes. 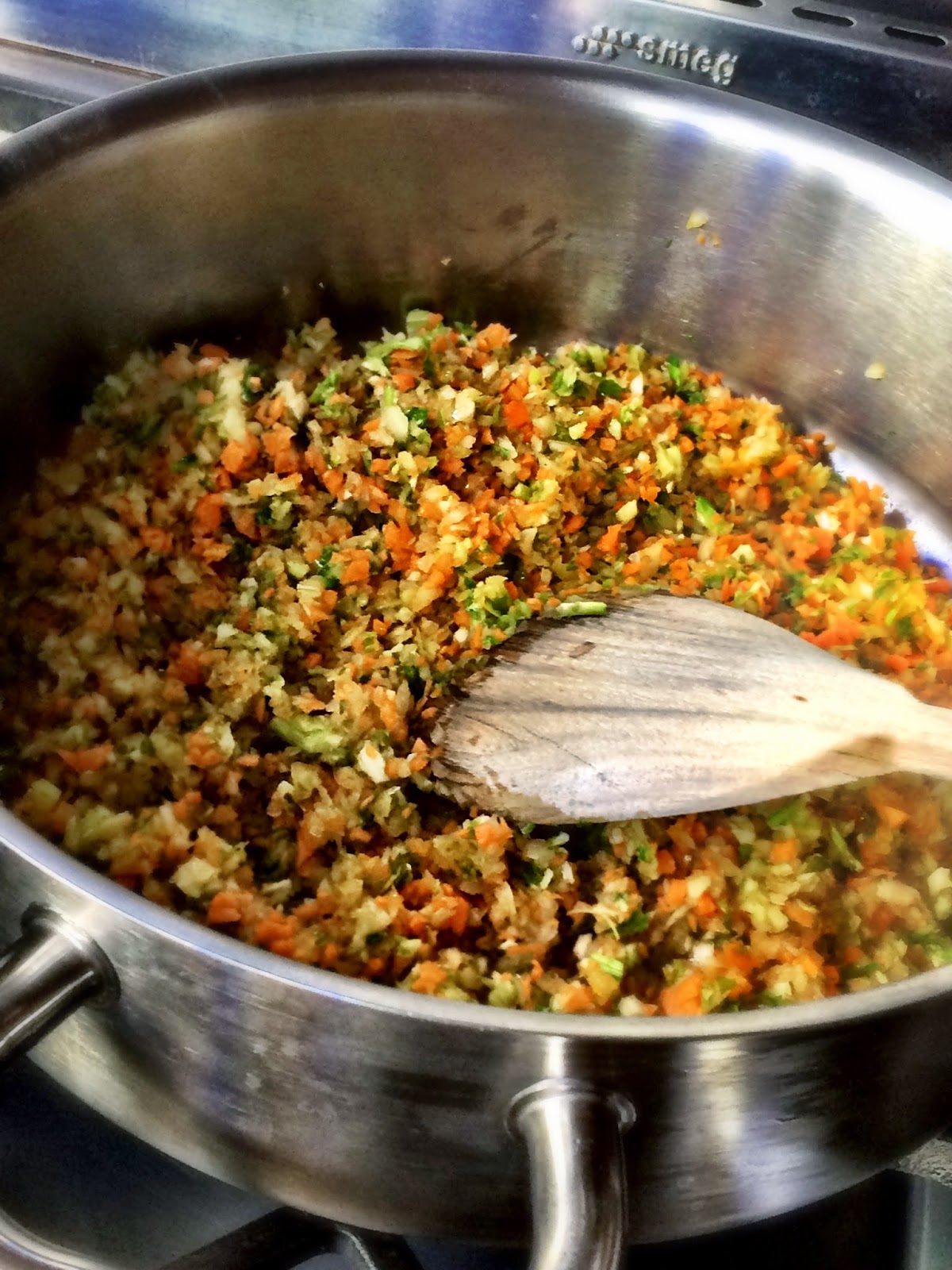 Soak some old bread in water, doesn't matter what kind of bread, I had two white bread rolls and some seed sourdough, so I used those. 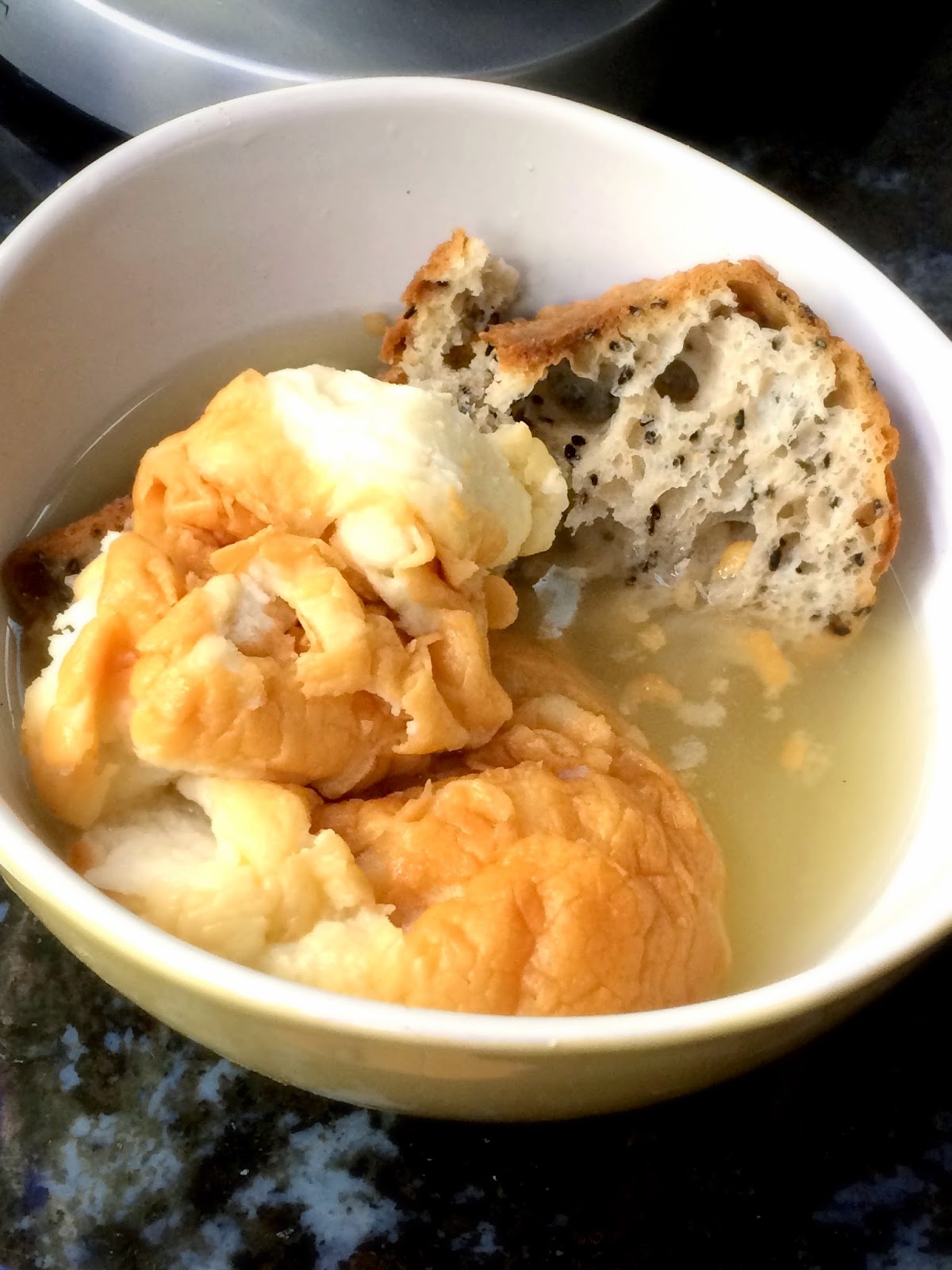 Squeeze the water out of the bread and crumble it into the pot with the cooking vegetables. Add a little vegetable stock if necessary and cook everything for about 15 minutes. Stir often and make sure that the mixture is quite thick and not too watery or runny. Adjust with salt and pepper (I quite like to use smoked salt here). 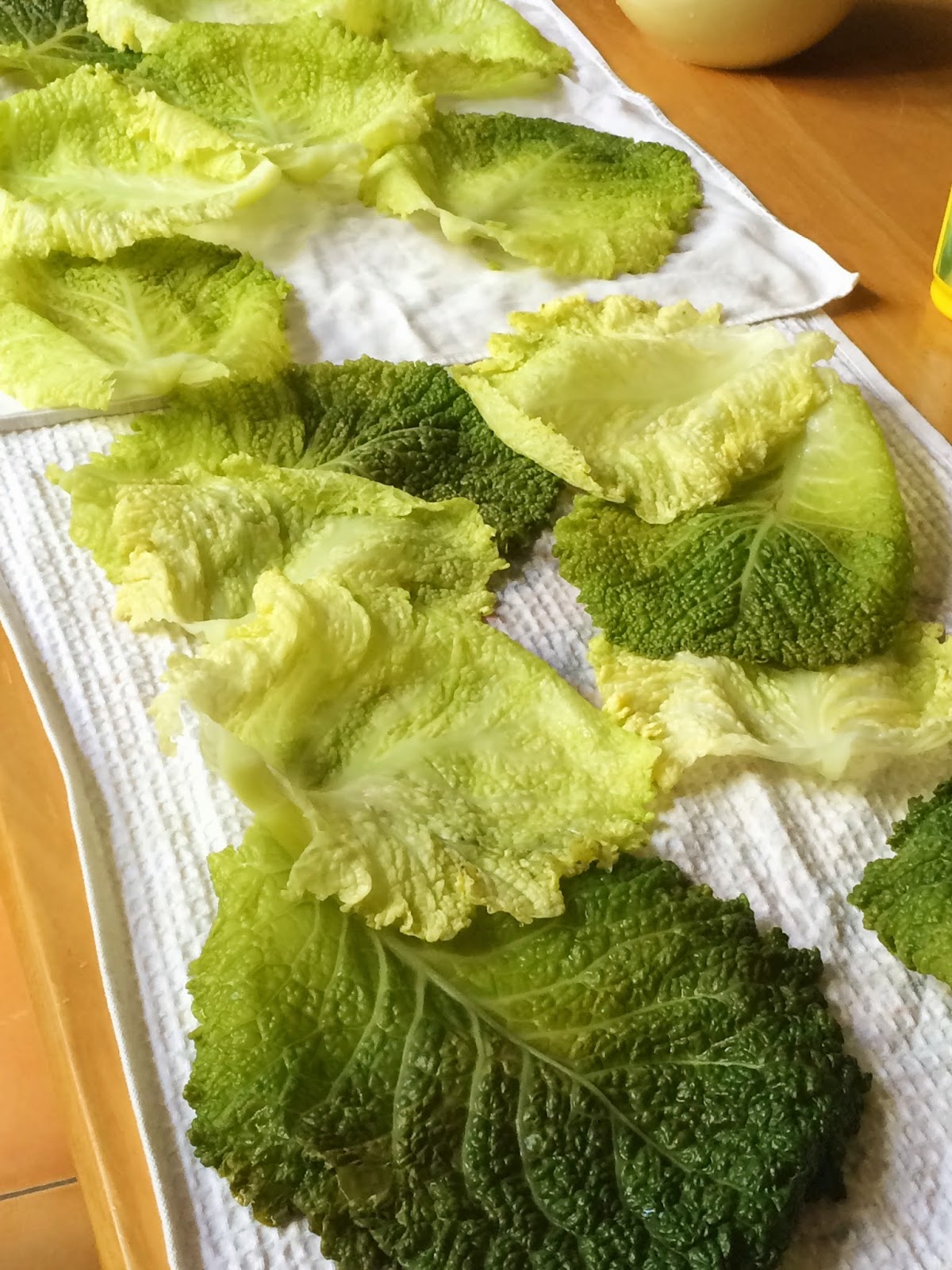 Divide the vegetable and bread mixture between the leaves. 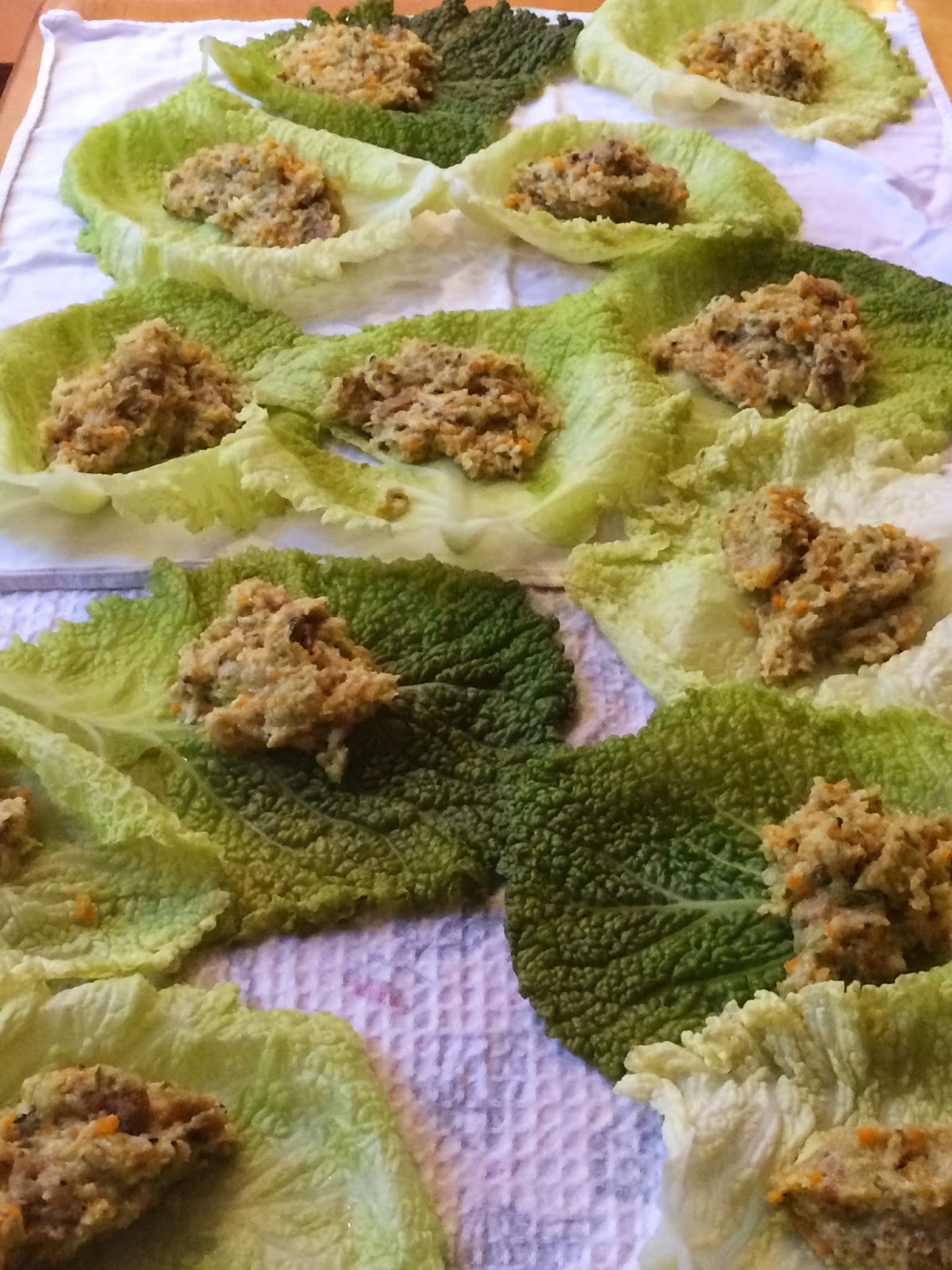 Roll up the leaves. 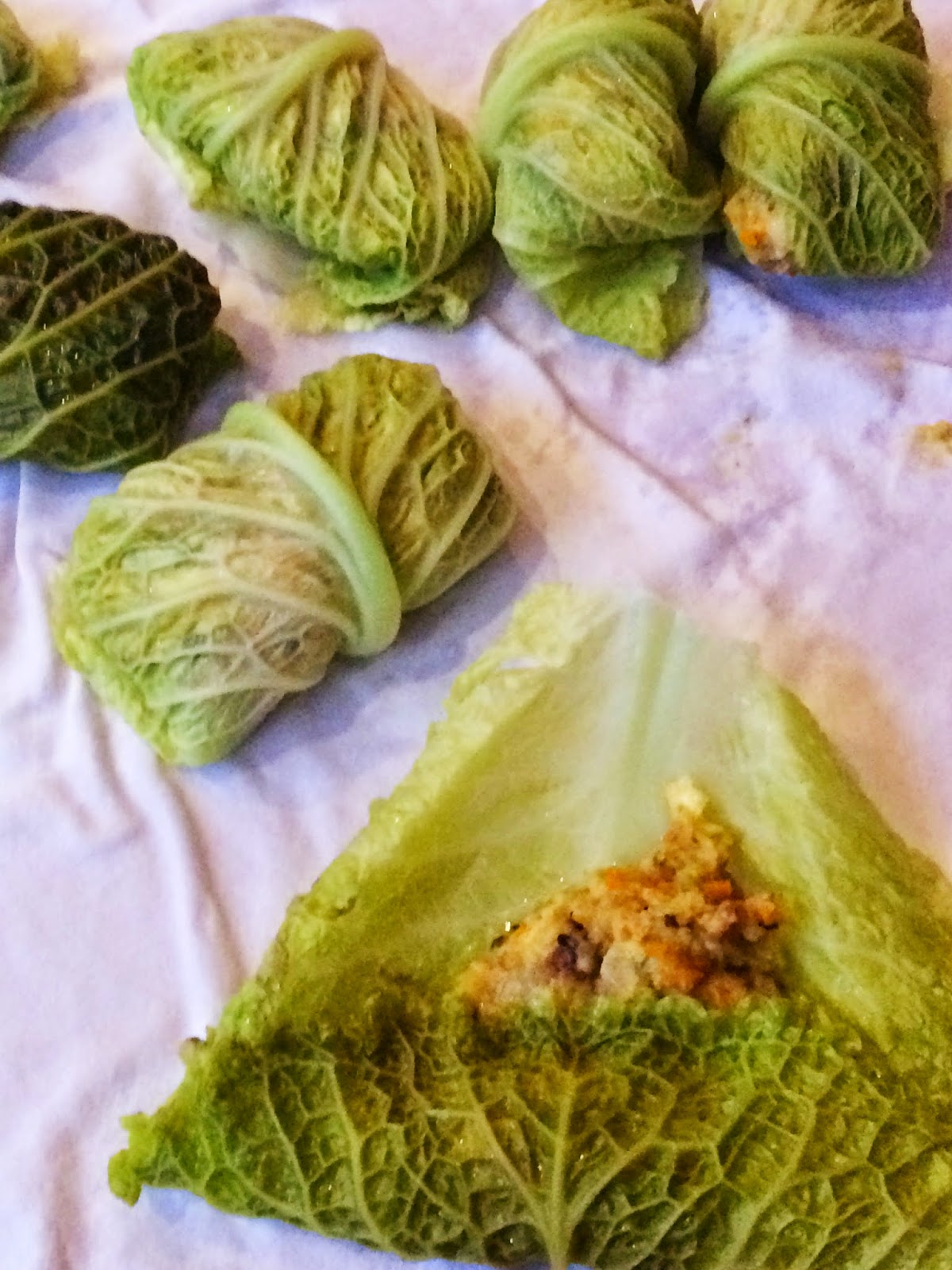 They look so pretty!! 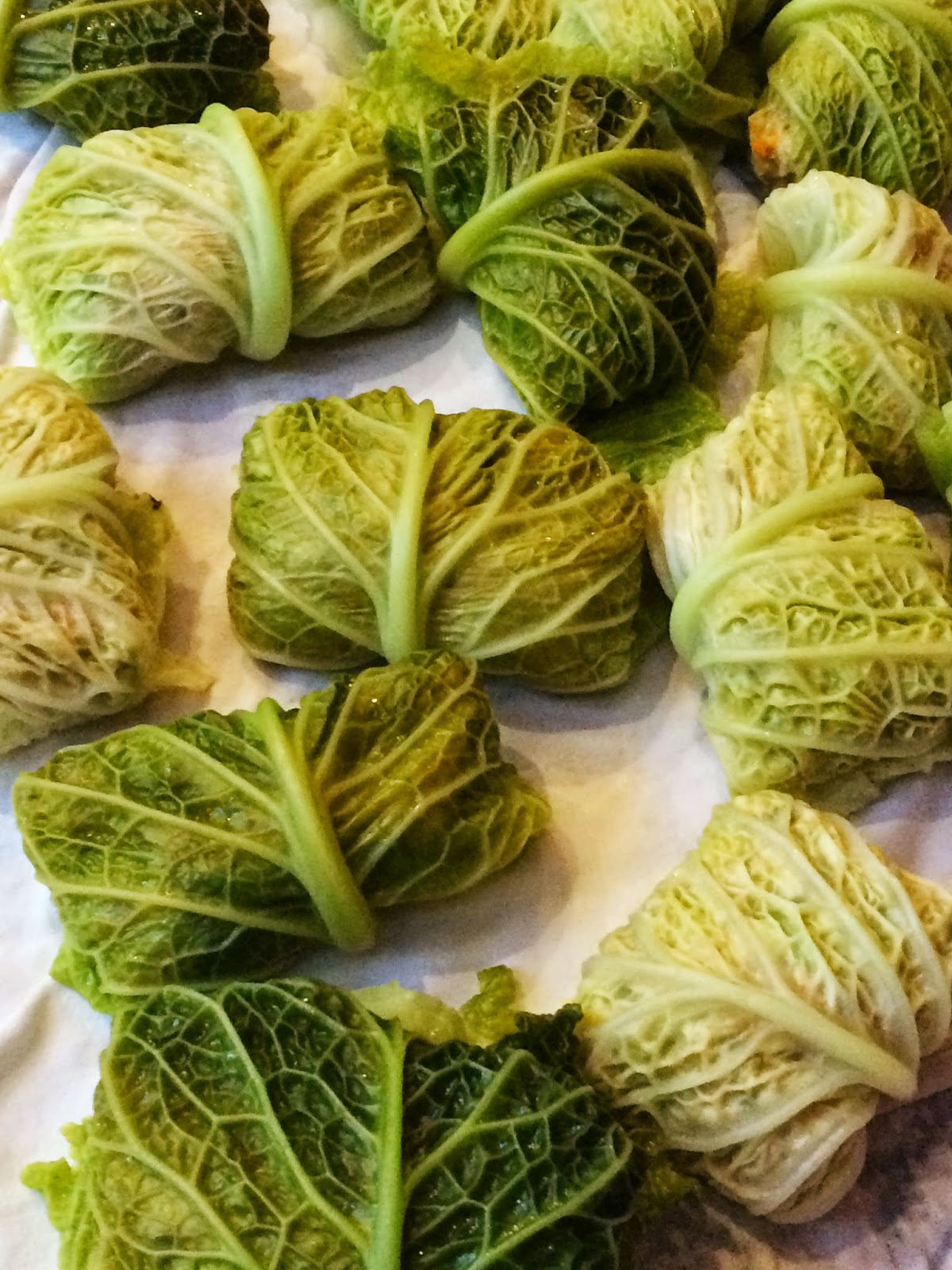 In a capable pan heat some olive oil (about 3-4 tbsp) and sizzle a couple of garlic cloves and 1 heap tbsp of tomato puree. 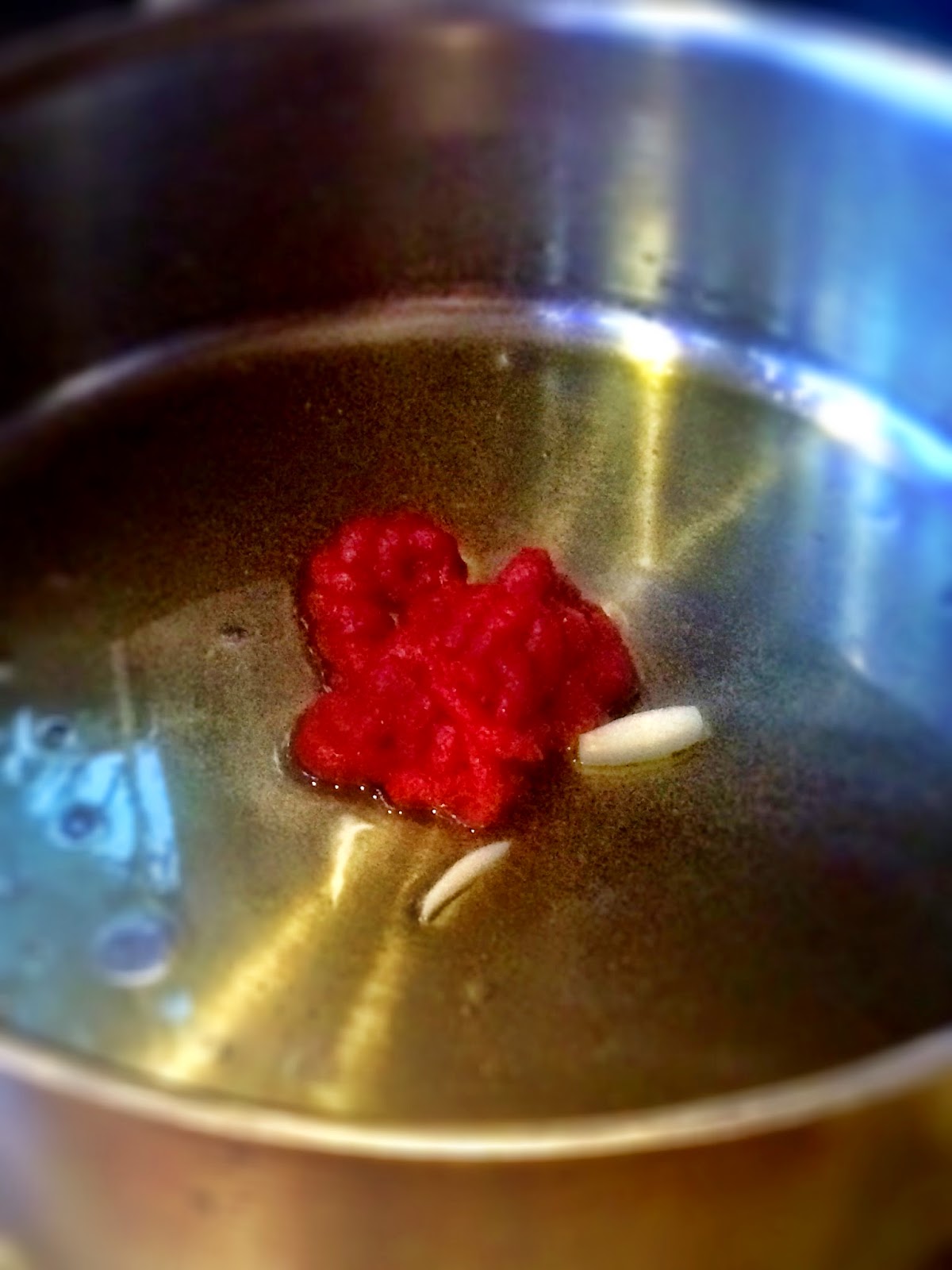 Pack the cabbage rolls in the pot tightly, 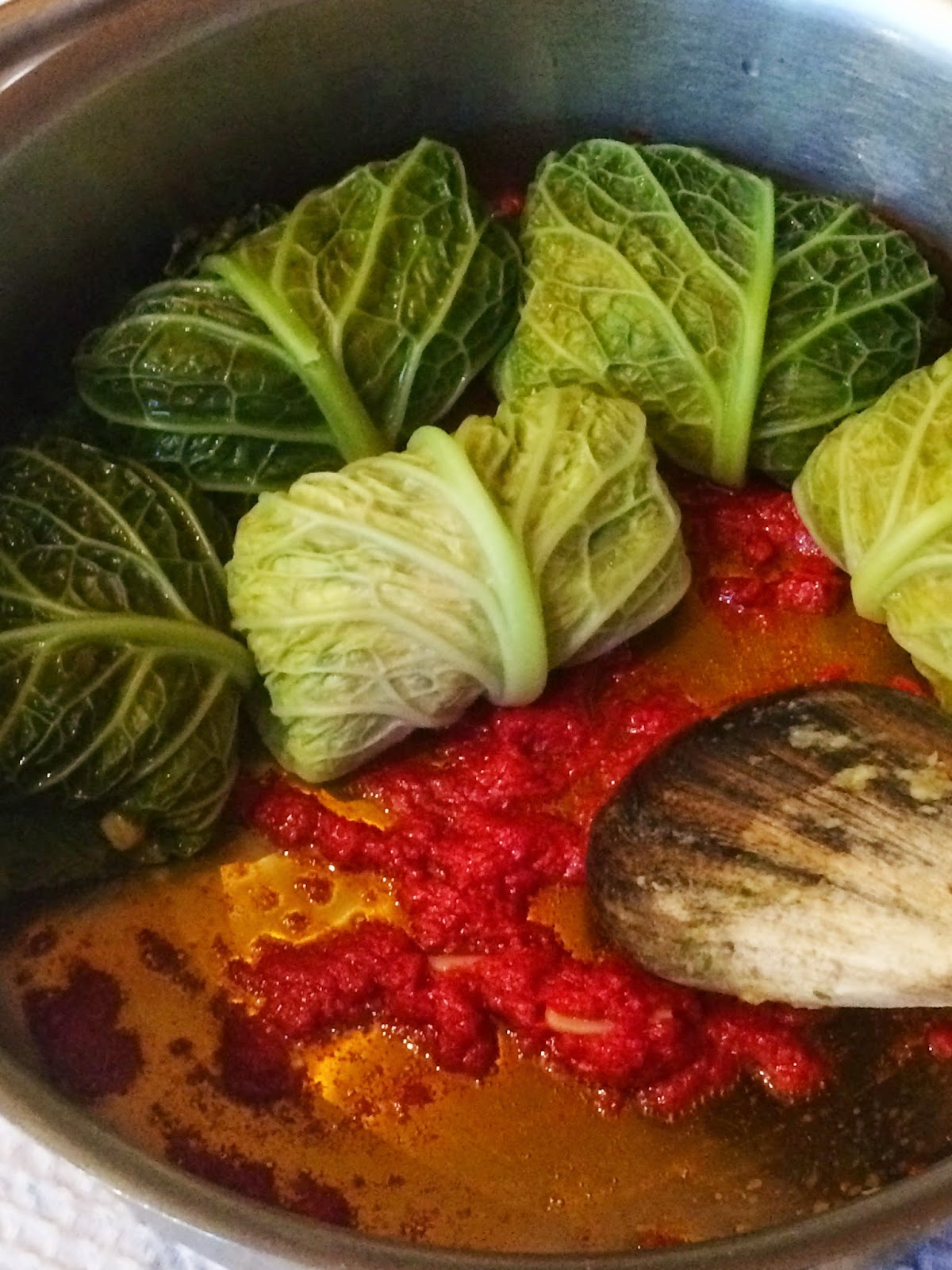 if there is not enough space put some on top, during cooking they will 'reduce' and you will be able to move them down into a single layer.

Add about half a litre of vegetable stock, cover and simmer on low for about 40 minutes. 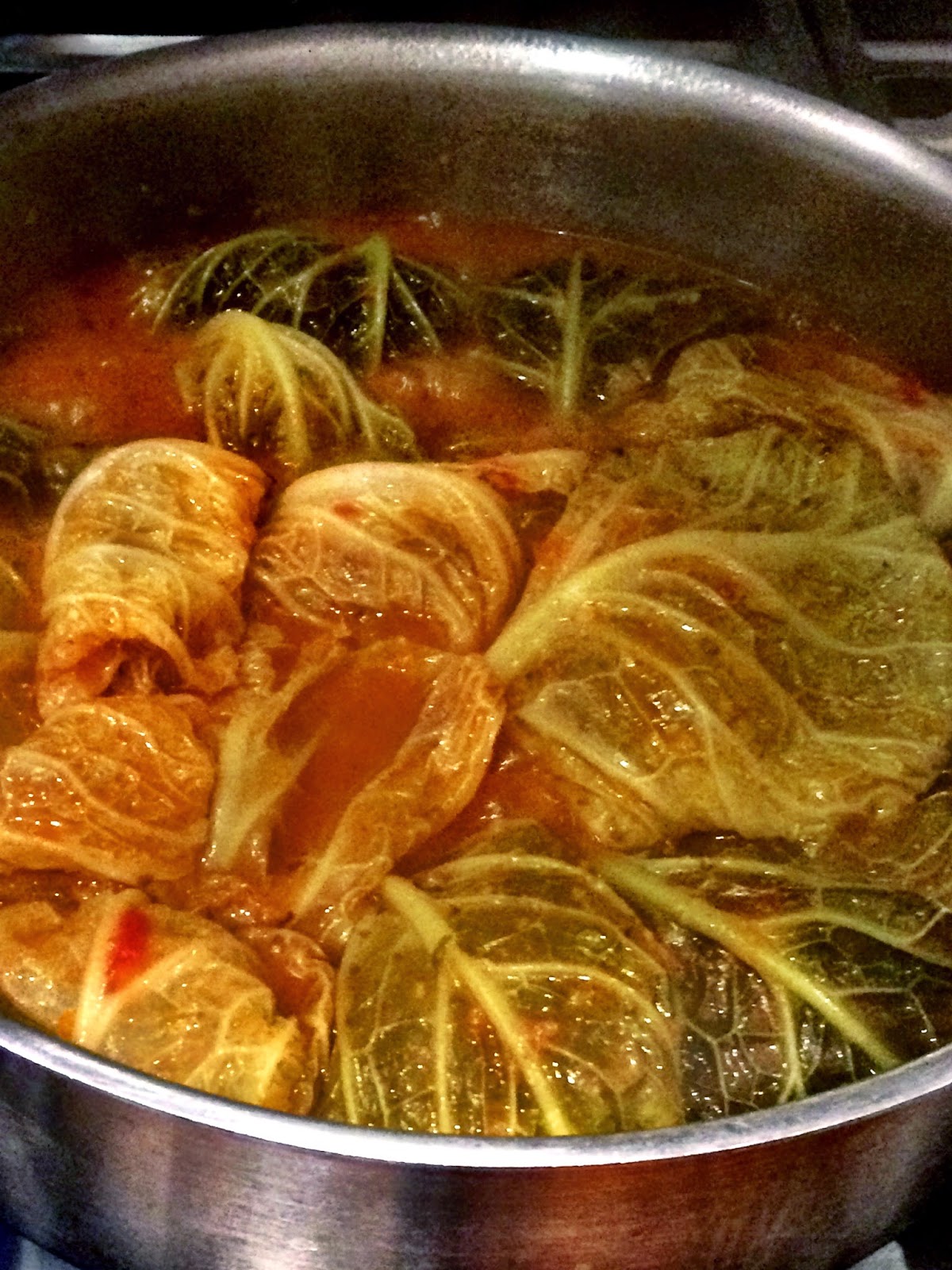 Serve hot (I had mine on polenta!) 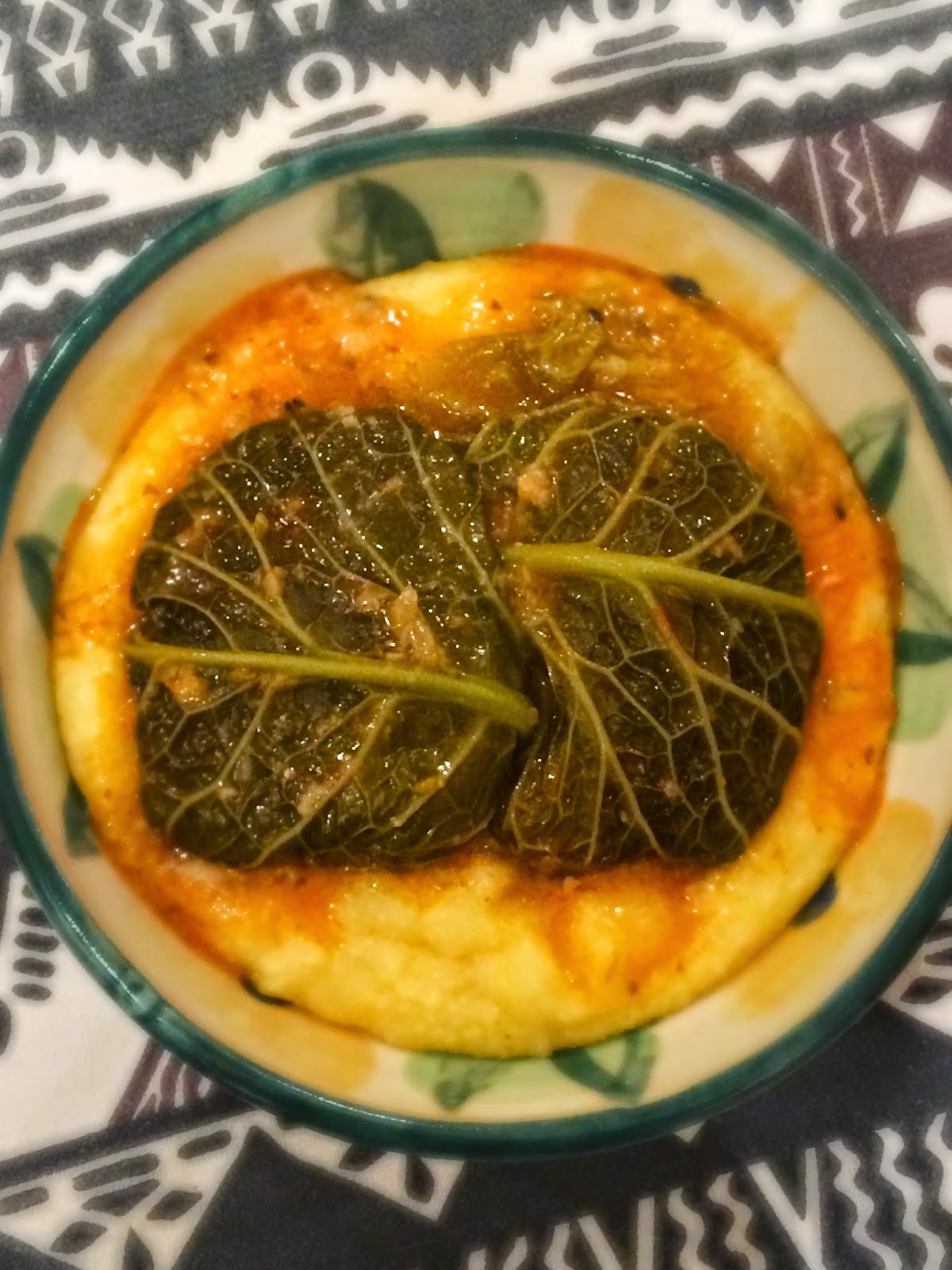 The leftovers rolls and sauce I wrapped in filo pastry and made a pie for the second day, and on the third day I still had the centre of the cabbage to use (quite a lot in fact, I had it after a few days though, for variety) for a Vegan Cabbage Bolognese Sauce.

Posted by Alessandra at 2:19 AM