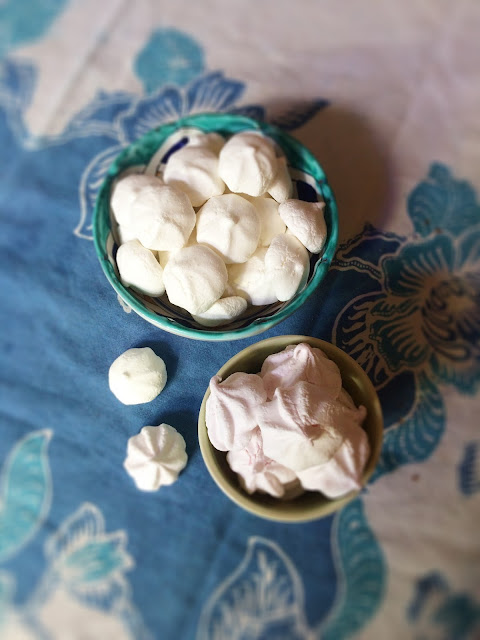 After making Aquafaba Vegan Pavlova I tried to make meringues. I changed the recipe only a little, and used less sugar (still experimenting though!). Here is the recipe:

Beat the brine first, then when it is nice and peaky add the sugar, one tbsp at the time, and the cornflour. Add the lemon juice and vanilla at the end and beat some more. I added some Fresh As plum powder to half of the mixture and then piped the two types of meringues onto a tray lined with baking paper and baked them at about 75°C fan for about three hours.

I offered them to some adult students at the Italian school to taste them, about half of them tried them but I didn't tell them that they were vegan, they liked them and when I told them what they were they could not believe it! Hearing that the other half of the class wanted to try them too, out of curiosity, and they liked them! Only a couple then said that they were a different from 'normal' meringues (one said less sweet and the other less crunchy). And then they asked for the recipe!

"Vegan baker Goose Wohlt coined the term aquafaba ("bean liquid") to describe the liquid, which French chef Joël Roessel discovered could be used in recipes much like egg whites."Source; Wikipedia


Photos and Recipes by Alessandra Zecchini ©

Posted by Alessandra at 1:56 AM